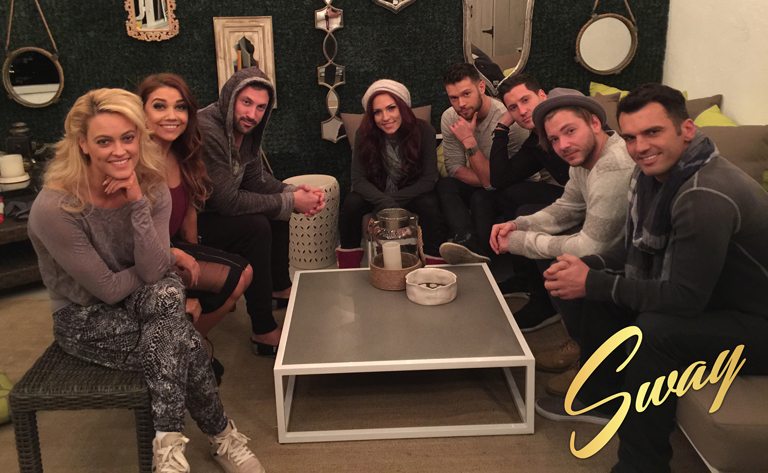 WE FINALLY GOT EVERYONE TOGETHER… SORT OF..

It’s been a few weeks since our last episode, but since we kept this one marinating for some time, we made it a bit longer just for you. I think you’re going to like it…

Making a documentary like The Making of SWAY is as tough as it is easy. It is really difficult to coordinate the talent involved in SWAY and get them together in one place… given their obligations and “day jobs.”  However, once you do, due to their immense talent, it’s easy to provide quality entertainment, on and off the dance floor or stage. What you don’t see enough of on Dancing With the Stars is what happens behind the scenes, and what an interesting dynamic their relationships have. When we were in LA we simply turned the camera on and let it roll…and what you are about to see is totally unscripted reality. It’s just a bunch of friends and colleagues interacting, but they just happen to be really talented and amazing at what they do.

This episode’s title, “Getting Together,” has a lot of meaning to us. We are all close but at the same time so far away. Literally and figuratively. Not only is the #DWMFAM split between two coasts, but even when everyone is within a few miles of each other, conflicting schedules and responsibilities don’t allow much time for interaction. Just to get this footage was a mission for us. Everyone has different call times, in different locations, different partners, different roles, and different personalities. 9am here, 12pm here, 4 pm back there. Even when we “got everyone together,” we were still missing some people. I know this a recurring theme in our show, but I don’t think many people realize how much more difficult this makes things… especially trying to maintain our high standards and caliber of the show.
Finally… after some back and forth, and some help from uncle Maks, we got together to go over the details concerning the show (which we spare you) such as expectations, logistics, rehearsals, scheduling, etc. What we do show is some some “friendly” banter as well as feedback and motivation delivered by the one, the only…the only one… Maksim Chmerkovskiy
It’s not hard to see why this particular cast was selected for the next iteration of SWAY: A Dance Trilogy after watching this episode. Obviously they are all fantastic dancers, but equally importantly, they work great together are also good friends… correction… FAMILY! When Maks, Val and Tony were looking to bring  to bring new members to the SWAY family they didn’t have to look far. Given the hype of the first show, there wasn’t much convincing being done either. Before they could finish their sentence the answer was “YES! I’d love to do it!”

Like Maks said, “This show might be the first show in history where the cast might actually have more fun than the audience!” …and the audience had a lot of fun! Now you get to relive it again… eight times!
We are all fans of dance, and we’ve seen a lot of dance shows. I know we’re a bit biased, but we really think this is the best theatrical dance production there is, especially with this cast.  Please let us know if you find a better dance show and we’ll make some phone calls…

Our Wednesday and Saturday shows are almost  completely sold out, especially once we reserve the seats for our staff. We are only now starting to promote the other shows, and we haven’t even done any advertising other than social media!  So if you haven’t gotten your tickets yet I don’t think they’ll be around much longer once we start actually promoting this show!

In this Episode we feature Dancing With the Stars and So You Think You Can Dance professionals, Peta Murgatroyd, Henry Byalikov, Jenna Johnson, Serge Onik, Artem Chigvintsev, Sharna Burgess and joined by your boys Maks & Val Chmerkovksiy, Tony Dovolani with special guest Zendaya!
If you haven’t seen the season previous episodes you can do so here:
1. THE MAKING OF SWAY 2.0 EPISODE 1: “SWAY 2.0″

And now… we present…

THE FIFTH EPISODE OF “THE MAKING OF SWAY – GETTING TOGETHER”:

AS ALWAYS, TELL US WHAT YOU THINK OF THE EPISODE AND DON’T FORGET TO SHARE WITH YOUR FRIENDS!

See you at the show…