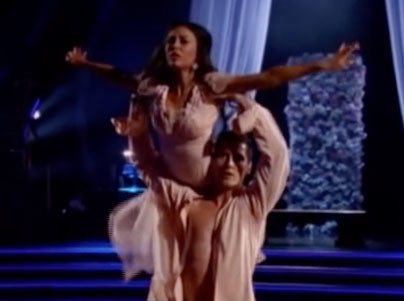 This week Dancing with the Stars was taken over by the Dynamic Duo performances where each couple was assigned a famous duo from the past to bring back to the stage.  The couple with the highest score of the evening was granted IMMUNITY from the elimination round.

There was also a DANCE OFF between all of the remaining couples who did not receive immunity that awarded the winners three extra points for their overall score of the evening.  Three points is HUGE at this point in the competition.

Here are some HIGHLIGHTS!

Janel Parrish and Valentin Chmerkovskiy completely blew the judges away with their contemporary dance as Romeo and Juliette!

Val explained to the cameras, “This dance is not necessarily about Janel and I, it’s more about the theme of love and how two people come together to celebrate each other.”

During rehearsal, Val looked at Janel and said, “Contemporary is a very physical dance, but your physicality is lacking.”

Pointing to her biceps, Janel said to Val, “Well, it’s gotten better though since we’ve started… look at that.”

Janel fired back with, “I can do one good push-up!”

Val challenged her and said, “One.  Go ahead.”

Val went on to say during his interview, “Janel is a bit of a weakling.  She needs to be strong for this dance.”

For an alleged weakling, Janel sure showed strength, agility, and beauty during that contemporary performance.  It was absolutely flawless and left the judges with nothing but positive things to say.

Bruno Tonioli started with, “Juicy dance romance, don’t come any juicer than this one.  Extremely ambitious, yet gorgeous and glorious in every possible way.”

Carrie Ann Inaba said, “To me, this was the perfect example of how abstract movement can tell a story and elicit absolute pure emotions.  You two together, that was your finest choreography Val.  And Janel, Janel, the way you execute it, this is to me the epitome of what dance is about.  Amazing.  Truly amazing.”

Len Goodman followed, saying, “Well, you know I knew you were a good dancer, but tonight you’ve shown me that you’re a great dancer.”

Lastly, Julianne Hough said, “There’s so many things that I want to say right now, but yet there is only one thing that I can truly say.  Breathtaking.  And you can feel it, right?  Like, I can see that you are a little emotional and like, you’re making me emotional because, because when you dance like that, there was nobody else in this room.  There was nobody at home watching, like that was for you two and it was so beautiful.  Choreography was intense. So amazing.  Yeah, breathtaking.”

Janel and Val went up to speak with Erin and she said, “Let’s talk about the dance. We have a shot of you right before you started and you looked emotional.  What was that all about?”

Janel said, “This is my favorite dance.  I love it so much.  I love contemporary.  It’s just such an amazing way to express emotion.  Um, and I just had the best time dancing with him.  I think it was my favorite one we’ve ever done.”

Erin replied, “It was breathtaking.”

Janel and Val received a perfect score of 40 that granted them IMMUNITY from the elimination rounds that evening.

Another outstanding performance was Alfonso Rebeiro and Witney Carson’s Cha-Cha as Batman and Robin.  All of the judges were hands down impressed with how amazing their connection is and how put together and in sync their performance was.

Bruno jumped up and screamed, “Alfonso rocks Gotham City! And you’ve got to be the hottest Robin I have ever, ever, ever, seen!”

Len said, “Cha Cha Cha-bang!   Get into your Batmobile  and head on to next week!”

Bethany Mota and Derek Hough were dressed up as Lucy and Ricky from the hit showI Love Lucy.  These two cooked up a spicy Salsa in the kitchen and killed it on the dance floor.

Len said, “Hotter than a bull’s bum in June!”

It is amazing to see how much Bethany has grown over the past few weeks.  For a girl who came onto this show with a goal to show the world who she really is, I think she surprises America with a new side each week.  As the judges explained, she brings versatility to the competition and is definitely someone who raises the stakes on the show every week that passes.

One of the last highlights was one of the DANCE OFF rounds.  As you know, Tommy Chong is 78 years old and suffers with many aches and pains.  However, that did not stop him from knocking out Michael Waltrip and Emma Slater when they went head-to-head dancing the Rumba.

When they walked onto the dance floor, Peta Murgatroyd had a look of worry on her face because Tommy had just hurt his calf during the last performance.  Tommy, on the other hand, just looked happy to be out there dancing.  Well, it was that confidence that allowed him to win the dance off and take the extra three points.

On to the Elimination round!

This week, America voted off Michael and Emma.

Michael’s last words were, “It was a chance to do something that was more emotional than it was physical. To get to experience the wonderful cast. The folks that we danced with.  To get to know Emma’s heart and who she is as a person.  I just grew so much emotionally and I’m a better person because of my tenure here and I’m happy that I got to be here and I’m sad I have to go, but . . . ”

Emma said, “Sorry, I am so emotional.  He has made me a better person and this season has been amazing.  Well, you know, you meet these people and they have the biggest heart and you just, you want to be like that and he’s touched me in a way that I’ll be a better person for the rest of my life and I want to thank you for that.”

The road has come to an end for these two amazing competitors, but they have both come such a long way and should be proud of their accomplishments.