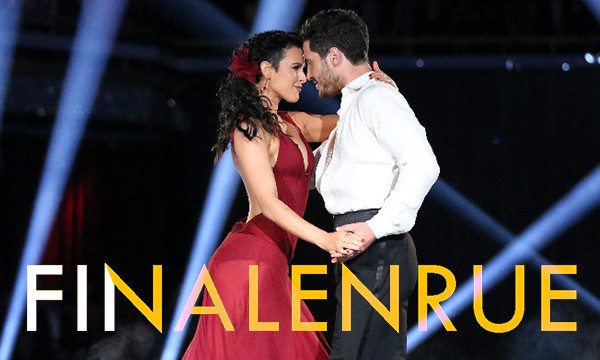 THE STAGE IS SET FOR THE DWTS FINALS:

Last week’s semi-final episode was full of surprises for everyone. The night was not just emotional on stage but also behind the curtains. The night was filled with drama, the highlight being Noah Galloway popping the question to his now-fiancee, Jamie. Cue the tears!

Val and Rumer opened up the night with a “Vision in White” according to Carrie Ann. The Viennese Waltz was inspired by the movie Fifty Shades of Grey. I don’t think there would be a better couple to play this role don’t you think?

Val and Rumer were so into character that Julianne said, “I felt like I’m back to the theater again.” Len pointed out their consistent high level of dancing throughout the season, while Bruno got excited about the sensuality and romance of their performance. He also complimented Rumer on her acting, which really makes all the couples performances much more enjoyable and real.

A Viennese Waltz by Noah and Sharna almost brought everyone to tears. The performance was so honest and touching. All the judges agreed that it was a incredible. Len thought that it was the best by Noah so far. Bruno was fascinated by the beautiful connection between the couple and how completely unexpected but natural and pure the dance was. In addition to a phenomenal dance, what was obvious for everyone is that they were having fun — especially Noah. “What made this incredible for me is seeing you have FUN!” Carrie Ann pointed out.

As usual, Riker never fails to pull off an energetic performance. The contemporary dance was so sincere and organic that Julianne admitted, “I could not tell who was the pro, I am so blown away.” Carrie Ann was up on her feet screaming and cheering for the beauty of the performance. However, in my opinion, Bruno summed up Riker’s dancing best by saying “it is extremely difficult even for professionals to attempt to dance like that”.

A fun quickstep by Nastia and Sasha, who is replacing Derek, was an absolute perfect routine, closing out the semi-finals night. As Carrie Ann said, the routine was an absolute showstopper! According to Len, the couple revealed the secret to a perfect quickstep, which is “to move fast but not hurry.” In one of the last performances Nastia has on the Dancing with the Stars stage, she finally opened up and became a dancer not just a gymnast.

As two week’s ago was America’s choice night, the last show was the first time on Dancing with the Stars the judges got to choose and coach the couples for a Judges’ Choice routine. As expected, the routines performed were absolutely breathtaking.

Val and Rumer kicked it off. Being paired with Bruno, his idea for a madness routine is contemporary cusion to “Swan Lake”. While the couple was pressured by Bruno’s complexity and expectations, they performed a genius routine that included one of the most difficult lifts, according to Carrie Ann. The performance was absolutely unique and unexpected, yet so beautiful. I guess Bruno has a method to his madness.

The second Judges’ Choice performance was Noah and Sharna dancing a Paso Doble, coached by Carrie Ann. Boy, Noah really knows when to step up his game. All judges were blown away, Carrie Ann’s choice of Paso Doble was on point. Julianne said she had chills from “head to toe” and I completely agree with her. How does he go on one knee, with only one leg? Incredible!

Next, Riker and Allison performed the Argentine Tango as Julianne’s choice. That was one of the better surprises of the nights. Judge Julianne did not only choose the routine, but she joined them on stage as well. The performance was fierce and intense. Riker was not only able to keep up with two professional dancers, but he was leading the two female dancers like a pro as well. We all know that Riker can perform, but this routine revealed his musicality and technique.

Ending the night with one of the most emotional and magical performances on Dancing with the stars, was Nastia and Derek, who stubbornly wanted to perform this routine although still not 100% healthy. Nastia and Derek danced the Viennese Waltz, as per Judge Len’s choice. Another surprise of the night, Len Goodman joined the stage and finished the routine with Nastia, and he still got it! I don’t know about you but I would feel pretty lucky if I were in her place! The routine brought everyone to tears including the Judges, Julianne was so touched by the performance that she said “This night has been really special. I think that was the most special dance I have ever seen, it was like none of us were here.” This performance was definitely the perfect ending to one great semi-final episode of Dancing with the Stars.

All four performances received well-deserved perfect scores that were added to the individual scores at the end of the episode.

Unfortunately, only three couple could make it tonight’s finals. Much to everyone’s astonishment, Nastia and Derek did not survive the semi-finals and were eliminated after performing one of the greatest dance routines on the DWTS stage. Who expected that? Derek to be eliminated with arguably the best dancer on the show?

THAT MEANS THE FANS VOTES DO COUNT!

Tonight is the night we’ve been all waiting for. Who is the next Champion of Dancing with the stars Season 20? Who will America vote for?

Who will YOU vote for….?

It better be Val and Rumer, if you want to a photo with the trophy at one of our dance studios…