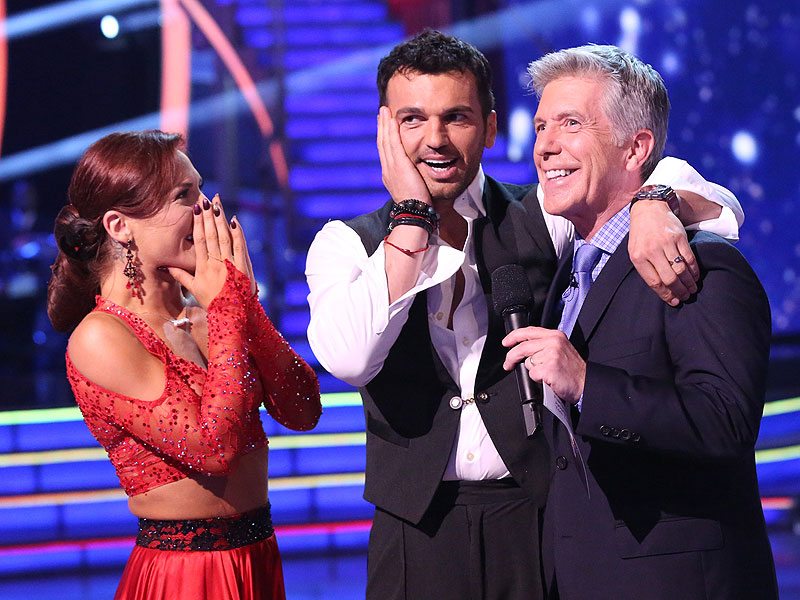 WHO’S READY FOR THIS WEEK’S EPISODE OF DANCING WITH THE STARS?

In case you missed the show last week or just want to refresh your memory of what actually happen in the show we got you covered!

Things are really heating up in the show and the competition is getting stronger for the stars and the professionals, who are working harder and harder each day to wow America each Monday. Trust us we know!

So what really happened last week?

Blindfolded, Janel Parrish anxiously waited in the rehearsal room, ready to get a feel for the person she was dancing with – and I mean quite literally a feel. Janel began at Artem’s hands, moved to his biceps, then his abs, and even snuck in a little buttocks action, too! But somehow, it was the “hair” that gave it away and made her realize that it was Artem.
Excited and ready to start, Artem explained to Janel that this week they were going to do a Burlesque dance!

Artem said, “There are a lot of moves that are very up close and personal.”

Janel looked at Artem with her eyes wide open and said, “Oh my! Okay.”

When Artem said that there might even be a pole involved, Janel shouted, “Sorry, daddy!” Something I’m sure most daughters would do before a performance like this.

Artem’s plan was to make Val jealous, and I think he might have hit his mark after Val saw a piece of their routine.

Come on, Val! You can handle a little friendly competition. You got this!
The last bit of information Janel and Artem received was that JESSIE J would be guest judging this week on Dancing with the Stars. That certainly raised the pressure, because they were going to be performing to her new song “Mama Knows Best.”

As the music for their Burlesque routine began, Janel took on her character with full force. There were dips, and flips, and lifts, and an abundance of sexy moves. What seemed to me to be a great performance didn’t go over so well with some of the judges. Janel walked up to Tom Burgeron and said, “I just want to say that my dad is here. Daddy, I’m sorry! I’m sorry!”

Julianne Hough was first to critique their performance. “I have a lot of nerves tonight watching these dances. Obviously, there is no denying that that was extremely sexy, but to me that was not Burlesque, because Burlesque has a cheekiness and almost a quirkiness and almost a dryness. That was really raunchy and sexy and hey, I like raunchy-sexy, but I’m just saying for Burlesque, to me, that was not as Burlesque as I think in authenticity it should be. Um, and I know I’m gonna get booed, I’m gonna get booed, but I did not see the Burlesque.”

Bruno Toniolo intervened and lightened up the mood with some positive feedback. “Don’t worry love, I saw it. Never too sexy for me, honey. There’s not a person in the country that will need Viagra tonight. You saved them a lot of money. I’m telling you.” Julianne fired back with “It’s about a tease though, that’s what Burlesque is. It’s about the tease, not giving it.”

Carrie Ann Inaba said, “Okay, what I appreciate is the trust that you were able to develop in one week, because there were a lot of dangerous lifts and you were absolutely trusting Artem 100%, so that says a lot about the switch up. You guys did very well. I will agree with Julianne. I think that Burlesque started sort of in comedy and in the beginning when the three of you were dancing, the girls, it was there. It was totally there, you were living it. But once you got together, I don’t know if you got distracted by Artem, or both of you guys got distracted by each other, but we lost sort of that little – the humor of it all. It’s okay, you can be alone.”

Jessie J finished off by saying, “I know you just apologized to your dad, but I don’t think my mom would ever expect that a song that I wrote about her to have that dance routine. I really enjoyed it. Again, I put myself in your shoes and know how hard that must have been and you really threw yourself into it. I kind of didn’t think about it being kind of really sexy until you said it, but that kinda makes sense, but I liked it and hi, mom.”

After the debate, Janel and Artem headed upstairs to speak with Erin Andrews.
Erin said, “You know it’s so weird. I must have missed the invite for me to be in the beginning of your routine with you up against that bar.”

Janel reassured her, “Next time, next time.”

Janel answered, “Oh, well no, I appreciate it. I’ve never done Burlesque before, so we worked hard and it was a blast and you know, I respect their opinion.”

Erin mentioned, “You said in your video package you weren’t thinking of Val when you kind of did the move where you were like facing Artem sitting down. What were you thinking of?”

Way to preserve your innocence, Janel

Janel and Artem scored 33 out of 40 this evening for the switch up.

Moving on to the highlight of the evening – Lea Thompson and Valentin Chmerkovskiy’s Broadway number.
During rehearsals, we see how Lea was exceedingly happy to be dancing with Val. She even confessed her love to him. Artem might have a hard time taking Lea back after the switch is over!

The concept of this Broadway dance was so unique and all of the judges were extremely impressed with Val’s choreography and Lea’s dancing. The performance was exciting, technical, engaging, interesting, and fun.

Julianne started by saying, “This was the first time that I saw you hesitate. When we were up on the stage watching you there – we, I was not there. When you were up there on the stage, I saw you get a little like, uh-oh, what comes next. Was I right or was I wrong? I don’t know.”

Lea answered, “I don’t remember. It’s all a blur.”

Julianne responded, “Yeah, but I felt like this was the first time that you were a little unsure. But, I mean, the concept was so fun and it was great. I mean, I loved watching it.”
Bruno was next to say, “Off the wall and insanely funny. Only you could put the cast of Cocoon on acid, I tell you. But apart from that, I can see the references to Hairspray. I could see the reference from The Producers, Susan Stroman. You did a fantastic number with the Zimmer frames and it worked. A treat for me.”

Carrie Anne followed, saying, “I agree. I mean, what was the concept, Val? Can you explain it?”
Val said, “Well, this is the home for retired ballroom dancers, but we still, back then, you got a little bit of swag, but not too much. Their swag is outdated.”

Carrie Anne said, “It was kinda like assisted living swag.”

Carrie Anne responded, “I actually loved it. It was way wackadoodle but, like, everything was executed great. I thought that Lea, you executed great Broadway, like you showed versatility this week. It was like smaller movements Broadway. It was more pedestrian, but well done.”

Lastly, Jessie J says, “I think my favorite thing about it was you, uh, for me, out of the whole night, your, like, your acting and dancing was the best. It was like you were really just like I am the character and I enjoyed, I really enjoyed watching you dance. The only thing I will say, because no one said it, is if you do have one of those don’t try it at home. My Nan is going to be thinking she can do that now.”

After they left the floor, Erin said, “Great reaction from the judges, especially on a night where everybody’s been a little harsh. How did you think it went?”
Lea said, “Oh, I just had the best time! He got me in the right spot where I wasn’t too scared and I just tried to own it like he told me to.”

Erin responded with, “And we had a grandma in a crop top! That was amazing. Let’s get your scores.”
The paddles went up and Lea and Val received a combined score of 34 out of 40!

By the way, did anyone happen to catch Tony Dovolani’s audition video for Dancing with the Stars way back in the day? Hysterical! When Tom Bergeron pulled the video up on the big screen, Tony’s eyes widened and his jaw dropped. Priceless!

So, this week its back to normal for our stars and professionals. Who do you think will wow America this week?