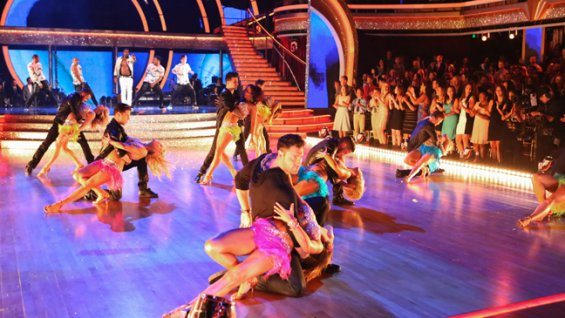 DANCING WITH THE STARS SEASON 18 OPENING NIGHT: MAKS, VAL, TONY START THE SHOW OFF WITH A BANG!

After last night’s Season 18 premiere of Dancing with the Stars, we got a mere glimpse of what is to come from the extremely talented stars!

While NeNe seemed a bit choked up, Tony stood by and supported her as the judges commented on her performance. She was clearly happy to be moving again after a health scare several months ago.

With great excitement Carrie Ann Inaba said, “You have an incredibly larger than life personality, and it shows in your dancing!”

She also mentioned how NeNe is a tall, statuesque woman, and to make sure not to dance down just because Tony, ya know…might be just a tad bit smaller.

Regardless of the size difference, they received a combined score of 21 from the judges, and are all excited to see NeNe match her exuberant personality with her moves in future performances.

Now let’s turn the page to the quirky brainiac with the special spunk, and that sweetheart with the killer swag…Danica McKellar and Val Chmerkovskiy!

Lighting up the ballroom with a beautifully executed Foxtrot, judges and fans went wild as Danica stood by Val’s side with her eyes wide open, and a smile from ear to ear.

Before the competition began, Danica mentioned how she was not as “cool” as Val, and she saw in the past how certain competitors have grown into themselves by the end of the show.

Well Danica…the DWM FAM congratulates you for receiving a 24 after your very first dance!

We are also very excited to see how you transform into that “cool chick” you always wanted to be. Although…being I don’t know, a MATHEMATICIAN and an ACTRESS and a DANCER, is pretty cool if you ask us!

Last but not least, let’s not forget to mention Mr. Maksim Chmerkovskiy, who as we all know, has returned to DWTS after what seemed to be a lifetime ago to his die-hard fans!

Dancing with Olympic Gold Medalist, Meryl Davis, the moment they met Maks said, “I love you, and I would love to marry you…” and popped the question…about if she is dating longtime partner Charlie White!

Good ice breaker Maks…as if Meryl isn’t already a little nervous about dancing with you, now she has to worry about all the hearts that broke around the world after that proposal.

All jokes aside, after Miss Davis giggled and said NO…they both went straight to work, and Maks began to teach her the basics of the Cha Cha.

Relaying what Meryl learned from the time of rehearsal to the time on the dance floor left the crowd on their feet, and the judges extremely impressed with her skills.

Bruno Tonioli said, “You are a combination of precision, sharpness, the lyricism of arms is wonderful…what a debut!”

With a combined score of 24, Meryl and Maks can hold their heads high in hopes for a great season to come!

MEMORABLE QUOTES OF THE NIGHT:

“I got a lot to give… be careful what you wish for.” – Maks Chmerkovskiy

Stick with us weekly, to keep up with the girls’ progress with our boys, as well as the other competitors on Season 18 of Dancing With The Stars.