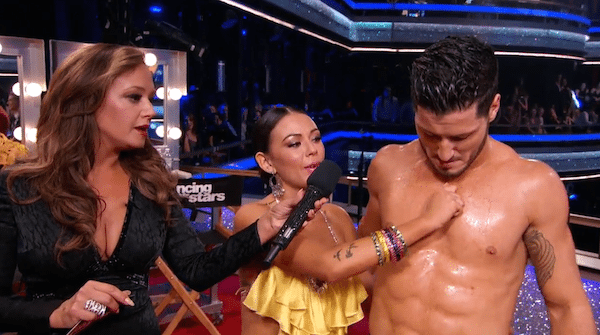 Before tonight’s episode… we will give you a full recap of last week’s show!

So what really happen last week? Well… Val dropped his shirt…again and Pitbull was there as a guest judge!

Pitbull opened the show with his new song Fireball and thats performance really got the show started, the group dance was out-of-control sexy and entertaining from start to finish!

What  about our #DWMFAM couple Janel and Val?

During the video package, we saw that Janel and Val seemed to get into a bit of a disagreement.  Val was attempting to explain what she was doing wrong, but things got a little too tense and he left the room. Dancing can’t be fun and games all the time, especially at this point in the competition.  Six weeks in, the pressure starts to build even higher and couples will either fumble or prevail.

All frustrations aside though, Janel and Val pulled it together for their Samba and put on an amazing performance that wowed some of the judges, but disappointed the others.

Bruno Tonioli was first to stand up and say, “Well, that is how you corner the market on hot Latinas.  Yes!  You have such a wonderful back because all your torsions and the tensions from the torso I absolutely love, because a lot of time when people dance Latin they move side to side.  You take it from the middle of the body.  That works so well.  Your turns are getting better.  Be very careful though when you do these very harsh passes.  Don’t throw your arms away, because you know that actually needs a little bit more edge, but wonderful.”

Carrie Anne Inaba was next and said, “You know, Janel, I am always amazed at you because you’re such a phenomenal performer, like you know the nuance, like you don’t perform with just your body or just your face.  It all comes together and it’s always like, I’m hungry here, I’m hot here, I’m light here, and you get all those nuances.  Tonight though, it was a phenomenal performance – and long.  I felt you were a bit off balance.  I felt like there were a couple moments where I felt, like, you grasping for Val and it was sad, because you are the real deal honey and I just thought tonight the balance was a bit off and threw you out of your game, but nice, well done, good choreography.”

Pitbull then commented, “Well, for one, Celia Cruz is one of my favorite artists – may she rest in peace, The Queen, you know.  So, for me, when I watched them dance, for me, eh.  I don’t know nothing about ballroom dancing, a little bit about dancing, but I know a lot about passion and when you are looking at that, I just didn’t feel the passion.  Like you wanted him and he wanted you, like that, and that’s the thing about salsa.”

A surprise to the audience in the ballroom as well as all of you watching at home, I’m sure.

Tom Burgeron leaned in and said, “You didn’t feel it” to clarify what Pitbull was saying.

Pitbull replied, “No, I didn’t feel it like that.  It’s not being mean, it’s being real.  When you go to a street club and you watch them dance, you see that passion.”  He then puts on his most passionate expression and utters a phrase in Spanish, which he graciously translates for us – “That means, I want to eat you!

Julianne Hough came in for the save when she said, “So, what I was gonna say actually was the choreography and the content was almost like a competition routine, so I wanna commend you on how difficult that routine was.  It might not have had as much passion, but I would say, I always wanna say, commend Val, because you always keep it very traditional and I love that.  So, well done.  I thought it was great!”

When Janel and Val headed up to the skybox, they met former Dancing with the Stars contestant, Leah Remini, who was co-hosting for the evening.

Leah said, “Alright, so they are talking about lack of passion.  What do you think of this?”

Janel took a deep breath, raised her eyebrows and said, “I felt it when I was dancing for sure.  I always feel passionate when I’m dancing with Val.  Yeah, we’re partners.  I love dancing with him.”

Val chimed in, “There is a lot of passion going on, okay?  I mean, I even waxed my stomach this week.”

Leah said, “That’s right, and do the imitation of him when he got waxed.  No, no, no, he wasn’t very manly about it.”

Val defended himself, claiming, “It was my first wax!”

Janel then held her hand up to Val pretending to get ready to wax his chest and said, “Alright.  It was just like, ready?  And go!”

Val screamed, “Ahh, Kelly Clarkson.”  If you aren’t familiar with that phrase, I would suggest you go check out the movie The 40-Year-Old Virgin for a good laugh!

If you want to see a great clip of Val’s waxing session, you can visit his Instagram@iamValC

After a good laugh, they received their score of 33 out of 40!

All jokes aside, Janel and Val were unfortunately voted into the elimination round this week.  Thankfully though, they made it out when America voted Jonathan Bennett andAlison Holker off the show.

Janel and Val  NEED YOUR VOTES AMERICA to help complete the triangle of winners from the Dance With Me family!

Tom mentioned how sometimes there are bittersweet moments on the show when couples who had their best dance getvoted off the same evening.

Jonathan responded, “Ya know, here’s the thing, I came here to do the show, to have fun, and to have a really great experience, and to bring life back into my life and that’s what I did, and I can’t thank Allison enough, and I had the best time of my life.  It was amazing.”

Allison responded, “I couldn’t have asked for a better person to dance with me.  Every single week on this show, I’m so proud of him.”

What are your predictions for this week? Who will America keep and who will it send home?
If you like these recaps please share them with your friends by clicking below!