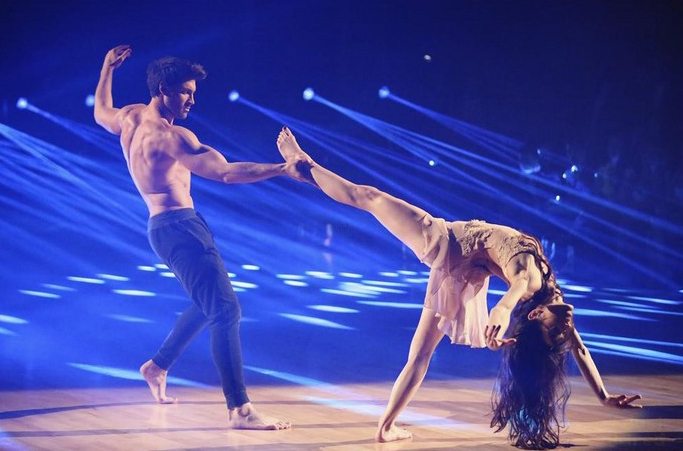 It was down to four couples – Meryl and Maks, Candace and Mark, James and Peta, Amy and Derek – one of which was sent home at the end of the evening.  This is by far one of the most interesting, exciting seasons I have ever witnessed and to be quite honest, they all deserve to take the win for making this show so great.

It has been a long and grueling 10 weeks, with nonstop rehearsals, constant criticism, injuries, breathtaking moments, high and low scores, and of course some fantastic dancing.  Each and every competitor has brought something different to the competition and has formed such a unique partnership that it’s sad to think it is all coming to an end.

But before the season finale, we have a few more performances to talk about.

First, the judges’ choice for Meryl and Maks was the Argentine Tango…a dance that Meryl already performed with Val.  During their rehearsal we were able to see a sincere side of Maks when he was being interviewed about his thoughts on the competition.

Maks said, “How can you enter a race without trying to win?  God knows I came back 13 times for this.  I wanna look back and I wanna say I literally had nothing else, nothing more to give.”

Meryl follows, saying, “If we were to win, I think I would be most excited for Maks.  I really want this for him.”

Looking at Meryl during rehearsal, Maks asked, “How do we win this?”  He went on to say, “The only way that we can take this is if this is great.  But you have to understand that I’ve done this before and failed…many times.”

As they stood on stage waiting for the music to begin, we see Maks looking sharp in his black tie attire, while Meryl rocked a beautiful corset top with gorgeous red flowing pants.  They looked like they were ready for not just any Argentine Tango, but THE Argentine Tango that would push them even closer to the win.

When the music started, Meryl climbed up on the table, fell into Maks’ arms, and the rest was history. The lifts, the holds, and the story…it was all flawless.  Yes, Meryl is a very good dancer and Maks is a fantastic teacher, but you cannot learn chemistry; and it is that alone that has kept them in this competition and has propelled them that much closer to winning.

The judges had only positive things to say after their Argentine Tango performance.

Bruno Tonioli stated, “That was sumptuously seductive. But, what I, there is a point I would like to make, what I think is extraordinary.  In the last few weeks, your dancing seems to be developing and linking into a storyline that is almost like watching the dance version of a concept album.  It is a story that continues, evolves, evermore stunning, evermore beautiful, evermore surprising.  It really is incredible.”

Carrie Ann Inaba said, “Meryl, last time you performed this with Val it was perfection. I mean, you achieved something masterful last time.  But this time with the added chemistry and this incredible magic that none of us can actually explain and put into words…with that, it just made it over the top.  It was beautiful, sophisticated, sultry, sensuous, perfection….again.”

Finally, Len Goodman said, “Well, last time I said it was the dance of the night, and there is nothing that I have seen that will make me change that opinion tonight.  That was…you’re good.”

Meryl and Maks received a combined score of 30 out of 30!

Before they moved on to their lyrical piece, we got an inside look at Meryl, who she really is and how she grew up to be an Olympic Gold Medalist.

We learned that Meryl grew up in a suburb of Detroit, Michigan and expressed interest in ice-skating at the age of 3.  She was also diagnosed with dyslexia at a young age, which made her work twice as hard to excel in school and other areas of life.

Most importantly, what we learned from her family, friends, coaches, and fellow Olympic competitors, is that Meryl is a determined, motivated individual who takes it all the way to the point where she will succeed.

Meryl has been on an Olympic journey since she was a small child, but today we see her in a different light…a dancer’s light, that has brought her down a different road.  We have seen more pure emotion and growth out of Meryl than ever before, and she has grown into an even stronger and more secure individual thanks to Maks’ guidance from the beginning.

The next dance Meryl and Maks performed nearly brought everyone to tears.  It was a freestyle lyrical dance that had everyone captivated.

After taking a few deep breaths and wiping away her tears, Carrie Ann said,
“First of all, I think you guys should get married!  We’re all thinking it, right?  Okay. I love gimmicks and show-stopping things.  It’s fun, but you just got real.  This is what true dance is about.  Dance is about the soulful expression of your true self. It has honesty, it has integrity, it has substance.  What you did there was the most stunning example of divinity in motion.  Congratulations.”

Bruno was next, “And it keeps getting better!  What you two have created is as close as it gets to a flawless work of art.  Thank you.”

Lastly, Len said, “There was no gimmicks, there was no gags, you just came out and danced.  I tell you, there’s good, there’s great, and there’s Meryl.”

Leaving the judges’ table with nothing but smiles on their faces, Meryl and Maks headed upstairs to talk to Erin.

Erin said, “Well, it did just get real.  Can I just say a nightgown has never looked better…my word!  Okay.  Fantastic job, first of all.  We heard all the compliments from the judges, Maks even saying, um, after your last routine, this was for you.  Do you feel like you guys just put it all out there?”

Meryl replied, “Yeah.  Um, you know I feel like we’ve just had a really special bond since the beginning of the season and I feel like it’s really, you know, taken us on this journey and it’s just been amazing.”

Erin went on saying, “Look, I get it…your Mom and Dad are here, but I think all of us just wanted you to kiss.  I am not even kidding…and then I was gonna ask how was it for you?  Looking over at Maks, she stated, “All right, buddy.  It’s taken you 13 tries.  Put that into words.”

Meryl and Maks received another perfect score of 30 out of 30!

Although it might seem like they have it in the bag, there are still two very good couples, Amy and Derek, and Candace and Mark, in the running with them. Yes, unfortunately, that means that James and Peta were sent home.

Before the show ended, James said, “It’s okay.  I really had an amazing experience on the show.  I’ve enjoyed it more than I ever thought possible. I’ve made some amazing friends, and I’m just grateful for the opportunity. It’s been a lot of fun.’

Peta followed, saying, “I’m so blessed to have him as a partner this season. I couldn’t have asked for anything more from him, and he was absolutely amazing. Thank you so much.

The best of luck to the remaining competitors!  No matter what happens, you have all made this season of Dancing with the Stars a memorable one.