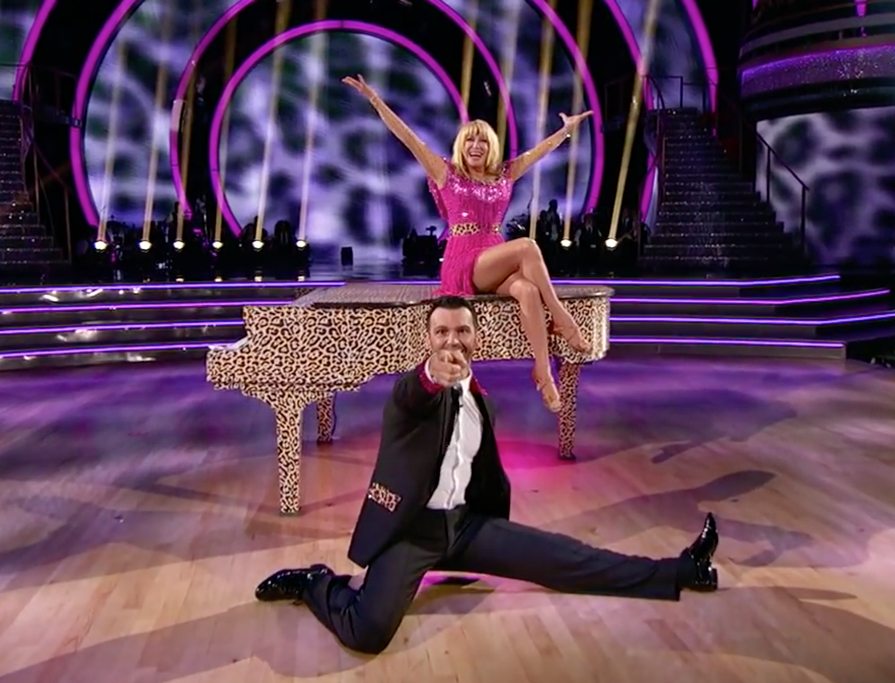 What’s the latest buzz on Dancing With the Stars “My Jam Monday”?

Riker’s foxtrot with Allison was fantastic. I was so impressed with his footwork, posture, and elegant movement. He didn’t look like he was thinking about the steps at all. A lot of the time the professional is the one that makes the star look great on the dance floor but this time both were equally working together to pull off that great performance.

Riker’s hair pushed back off of his face made him so much more appealing too. He looked and danced thepart. What do you think?

Bruno Tonioli said, “Ah, the hair and the look totally slick. Foxtrot even slicker.” He went on to explain his appreciation for the tiny details he puts into the routine while maintaining the overall feeling of the Foxtrot.
Total score 32 out of 40
Patti Labelle partied hard to “In Da Club” by 50 Cent. This woman might be 70 but her heart is of a 20 year old. Dancing the Salsa with Artem, Patti got down with her fancy moves.

Total Score 28 out of 40
“Thinking out loud” by Ed Sheeran was Nastia’s song choice to perform the Rumba to with Derek. For those who may not know much about the Rumba it is an extremely difficult dance. It is a slow passionate dance and every movement has a specific hold on a certain count. It takes time to master it and for one week of practice Nastia pulled it off beautifully.

Julianne Hough said, “That was so beautifully executed. You’re probably the most naturally as far as technique and everything and you’re so graceful, and so beautiful. I mean that was incredible for week two. My only thing is the fist half of the dance I felt there wasn’t a very real connection, and then half way through it blossomed into that. So I would say like – way to go. That was really beautiful”.

That performance was outstanding. Whether there was connection in the beginning of the performance or not, Nastia’s leg extensions alone were enough to win me over during that dance.

Total Score 34 out of 40
Rumer chose to dance the Cha-Cha with Val to “Rumor Has It” by Adelle. Topping the leader board lastweek Rumer was ready to push it to the limit to make sure this dance brought her to the top again.

Carrie Ann Inaba said, “Val I love the choreography. That was just hot. There was something about that – it was special. Rumer okay, what I love most about you is when you step girl you step hard. You step with intention, and most people are afraid to do that.”

There is definitely something special about Rumer. She dancing with purpose and you can tell she is very determined to take home the Mirror Ball Trophy.

I really like Robert. You can’t help but smile when he performs because his facial expressions show pure happiness and confidence. He danced the Foxtrot with Kym to “You Make Me Feel So Young” by Michael Bublè.

Len Goodman said, “I thought your footwork was good. I’m so happy that week two we’re seeing somebody that’s worked a little bit on technique. Okay a little bit lifted up but you’ve got style, you’ve got panache, you come out and we can see you’re just enjoying yourself.

That’s a great review coming from Len. He is probably one of the most critical judges when it comes to proper technique and if Robert keeps receiving reviews like that he will go far in this competition.

Total Score 27 out of 40
Charlotte had a rough week when she saw that people were bad mouthing her on social media. There will always be someone trying to bring you down. That just means you’re getting more popular. She danced the Cha-Cha with Keo to “California Gurls” by Katy Perry.

Total Score 28 out of 40
Dancing the Samba to “Homegrown Honey” by Darius Rucker, this was another heart felt dance by Noah and Sharna. I am amazed with how much control he had over each movement during this performance. The connection Noah and Sharna have to hold in order to pull off a performance like this one is so unbelievable and moving. Even if Noah doesn’t win this competition he will have touched the hearts of millions across the country if not the world.

Julianne said, “Your musicality is so on point. You never miss a beat, you’re always there, and I think it’s because you know your body so well, and I think that’s actually an advantage because there are some people in this competition that are erratic and can’t really hone it in. You know your body so well and you are very strong and very grounded and you’re always on beat. I love it”.

After all of that the topper was when Noah’s girlfriend surprised him by showing up a few days early to see him at the show.

Total Score 28 out of 40
Chris and Whitney’s Cha-Cha to “Time of My Life” by Pitbull wasn’t the best dance of the evening but for 4 days of practice they did great. Whitney’s teaching skills are impressive being that she didn’t even have a week to teach someone with no prior dance skills a full routine to be performed on live television.

Total Score 26 out of 40
Suzanne and Tony were adorable. I really liked the choreography Tony came up with for this Jive.   Suzanne didn’t skip a beat and the Jive is very difficult for anyone let alone a woman who is 68 years old. They danced to “Whole Lotta Shakin’ Goin On” by Jerry Lee Lewis.

Bruno said, “Superb! Look at her all perked and alert. Shaking upstairs, shaking downstairs, and everywhere in between. Very good job my darling because it was teasing but never sleazy. I liked it. I liked it”.

VOTE: 1-855-234-5611
Willow and Mark got a round of applause after their Argentine Tango performance to “Somebody That I Used To Know” by Gotye. All of the judges praised Willow for her beautiful lines, lifts, intensity, and passion. She might be the youngest in the game but she has what it takes to go all the way to the finish line.

Total Score 32 out of 40
Redfoo chose to Jive with Emma to “My Sharona” but The Knack. A little concerned with his placement on the leader board last week he wanted everyone to know that winning is something that he wants, and he wants it bad!

What upset me the most is that after an amazing performance with Emma, America took away Redfoo’s chance to win by voting him off at the end of the show.

Everyone’s jaw dropped and the crowd started to boo rightfully so because it was not his time to leave. I’m not just saying that because I’m a fan of Redfoo either. Maybe he wouldn’t have won but he was good enough to make it past week two.

Granted he was going against #DWMFAM member Tony Dovoalni with Suzanne in the elimination round, and we are all happy Tony made it through. Still though Redfoo seemed to get the short end of the stick this time.

I can’t stress enough how important it is to vote for your favorite couple.  Perfect scores are great but it is your votes that push these stars to the next level each week.

Let me know your thoughts and predictions for this weeks episode of Dance With the Stars.

Dance with you later

SCORES FOR WEEK 2 SEASON 20 of DANCING WITH THE STARS