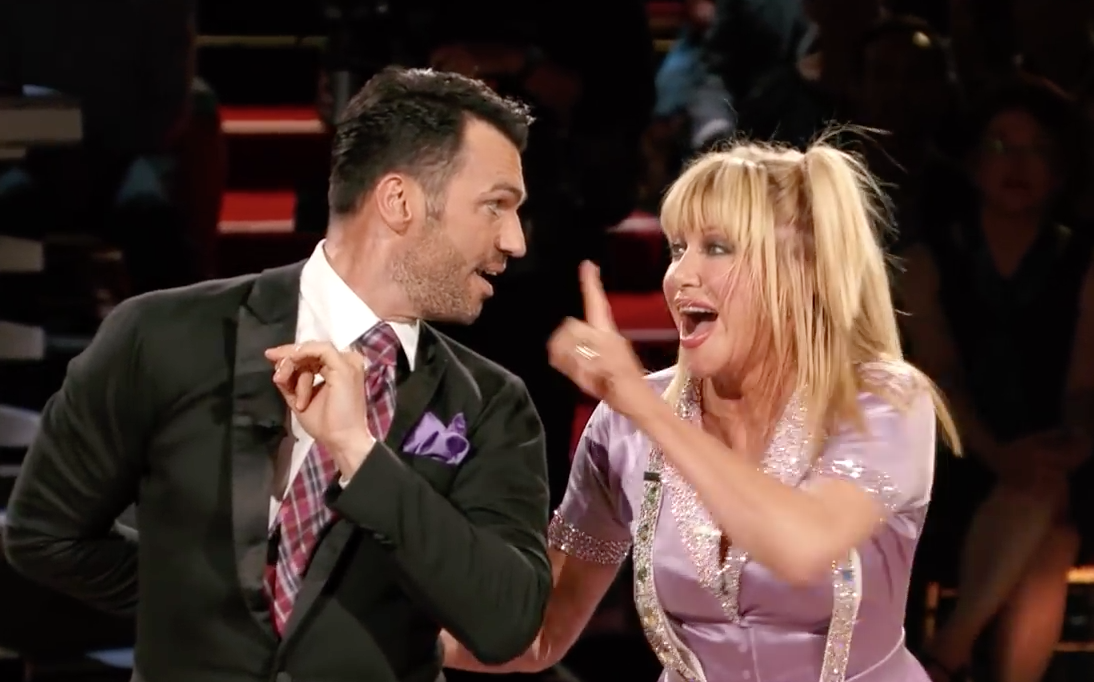 Happy Monday! We’re back with the recap of last week’s Dancing With the Stars show where the stars shared their most memorable moment with us.

This is one of my favorite episodes because the emotion from their past experiences radiates through their dancing, which is so beautiful to watch. It also gives you a chance to get know each star on a deeper level.

Michael Sam shared a heart felt story about how he didn’t grow up with very much, and when his brother was tragically killed by a gun shot, his father seemed to fade out of his life. This was a struggle for Michael growing up especially being a boy.

Throughout the years he was able to rekindle the relationship with his father however when Michael was brave enough to come out to the world as an openly gay man, his father immediately cut ties.

His dance represented how Michael made it through without needing the relationship with his father and how it pushed him to being who he is today.

Michael and Peta have been struggling throughout the weeks with technique and style choices however tonight their Rumba perfectly depicted the message Michael was trying to portray.

His lines were beautiful and his moves were very graceful. Peta did a wonderful job with the choreography.

Julianne Hough said, “I love this stage of the competition because this is when it gets real and this is when you have to improve each week to get there and what you did tonight was become so vulnerable and trusting with Peta that I haven’t seen. This was so beautiful, and your foot work; you were pointing your toes, you were doing your cucaracha, your hips were going crazy and your lines. The breath that you had right at the beginning, that was the start that was it. You did it.

Riker Lynch dedicated his dance to the year when he made it big with his band. It took him about 7 years with his brother’s and sisters to get a song on the radio, and once they made it the band took off.

Dancing the tango with Allison Riker yet again did a fantastic performance.

Bruno Tonioli said, “Oh I love Riker. He stands out like a vibrant neon sign that spells talent! You have so much talent and so much youthful enthusiasm it’s almost difficult to box it all together. But you did it tonight.”

He went on to say how difficult the music was but Riker still pulled off a proper tango.

Rumer Willis wanted to share her experience with the bullying she had to withstand throughout her life. She always felt the pressure to be perfect being the daughter of Demi Moore and Bruce Willis. She was called names and told she was ugly. Today though she has evolved into a beautiful butterfly standing up for those who had experiences with bully by showing her beautiful soul on the dance floor.

Rumer and Val did the waltz and it was truly powerful. You could feel the emotions with each step they took.

Carrie Ann Inaba said, “When I watch you dance I can’t explain what happens to my body. It’s like I meld into your, I think I do. There is something so powerful about the way you dance. The velocity with which you move and it’s coming from a power inside you, and the way you finish every move. You dance about ten feet beyond where your arms end and it just pulls us all in. I love the way you dance.”

Robert Herjavec shared a very emotional memory of when his mother fell ill and how her last words were “I love you” before she passed away. Robert’s mother loved nothing more than Dancing With the Stars and when he was asked to be on the show he said yes without a doubt in his mind.

Robert and Kym performed a beautiful Waltz that had everyone holding their breath. I know I was crying.

Len Goodman said, “Listen it was the Last Waltz but we know it’s not your last dance. On top of that let me you it’s your best dance and the other thing I always think my mom is looking down at me. Your mom is looking down right now cheering and cheering. Well-done Robby.

Willow Shields and Mark Ballas performed a Contemporary dance that represented her ability to stand up in the world and be just as good as the adults around her.

The dance was an interesting play on the theme of The Hunger Games. It was like a theatrical performance representing battle and war and how Willow was the past to survive amongst all the other warriors.

Carrie Ann said, “Bravo. Really that was one of the most difficult dances because you had to create the music and you knew what tone. There is a specific tone to danc that type of dance to that you have to like sustain but pull back and keep the emotion just right. Everything about that was pitched perfectly. I am blown away by you Willow, and I can’t wait for next week.”

Nastia Liukin did a fantastic Argentine Tango with Derek as a tribute to her Olympic gymnastics career. It was sharp and precise however I did agree when Len said their was a lack of emotion within the dance.

It was beautiful to watch however the connection and passion between two people plays a huge role in the Tango, and it seemed a bit lacking with this dance.

Noah Galloway performed a Contemporary dance with Sharna to represent the acceptance of who he is now compared to the man he used to be.

The dance was breath taking. The lifts that he can perform with such grace, and agility are absolutely out of this world fantastic. These two have the greatest connection I have ever seen on this show.

She went on to thank him for doing what he does every week even though he is physically impaired, and giving everyone hope to keep going.

Suzanne Somers struggled last week with Carrie Ann’s comment about not putting enough emotion into her performances. This week for her most memorable year she chose the year she received the leading role on Three’s Company a hit TV show in the 70’s. She dedicated this dance to her co-star John Ritter after he died tragically from sudden heart issues.

Carrie Ann said, “you might have been saying goodbye in many ways but tonight I actually felt you said hello to the competition because tonight finally you remained true to your fun light hearted nature. But you brought more depth, you showed us more content you showed us elegance you showed us grace. I am so thankful. Well done.”

Patti Labelle dedicated her dance to the year her son was born. Being a traveling singer Patti was able to open shows all around the world but she lacked on thing…a child. She performed until she was nine months pregnant in six-inch heels! She is an amazing woman. She performed the Jazz with Artem to a song she recorded shortly after her son was born.

Bruno jumped out of his chair and said, “Labelle of New Orleans. What a hot joint, and the Jazz was even hotter.”

The woman does have flavor I’ll give you that.

Chris Soules dedicated his dance to the year he met his fiancé. Growing up on a farm Chris didn’t have many relationships and when he finally fell in love things didn’t turn out the way he had hoped. He asked this girl to marry him but they never made it to the Alter. Chris was heart broken and when his sister signed him up for the Bachelor, he was able to find the love of his life Whitney.

Chris danced the Rumba with his partner Witney. This was by far my favorite dance of his this season despite what the judges said about connection and technique. You could really tell how emotional his journey was to find love.

Bruno said, I think you’re extremely genuine and very very honest in your performances. I can read it. I can get your intention. You wear your heart on your sleeve. You are who you are and it’s wonderful to see that. I told you to work on the turns last week. The turns were much better. You were not losing balance, and just a little bit more flow of movement but you are going the right way Chris you did well.”

Unfortunately tonight we have to say goodbye to Michael Sam and Peta Murgatroyd.

There were so many heart felt emotional dances last week I think I reached my quota of tears for the month. This week though it’s time to shake things up a bit with Disney Night!

Get ready to see some of your favorite Disney stars brought to life on stage tonight on Dancing With the Stars.

WHAT’S YOUR PREDICTIONS FOR TONIGHT’S SHOW? SHARE YOUR THOUGHT BELOW!

Dancing With the Stars Week 4 Scores: