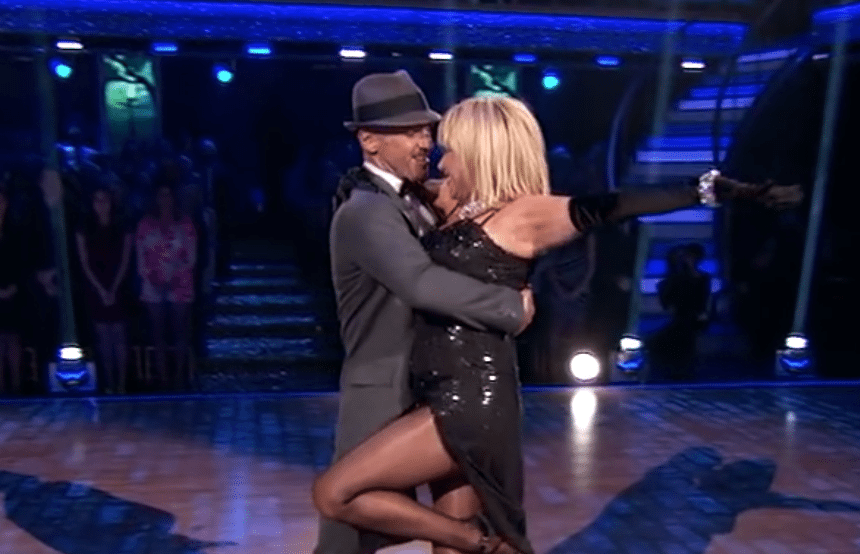 Rumer Willis and Valentin Chmerkovskiy went against the grain by choosing to be the villains from The Little Mermaid. Miss Rumer was given the opportunity to play a princess but she switched it up by being the fierce octopus Ursula instead.

Val did an amazing job with the choreography for this Samba performance. It was so great that Len Goodman had nothing to say but, “Rumer I said it a few weeks ago, you are a fantastic dancer. That’s it.”

Riker Lynch played Jack Sparrow, which is one of my favorite Disney characters! For this dance Riker and Alison had to perform the Paso. I would say that this type of dance was a little out of character for Jack Sparrow because all though he is a pirate if you know anything about Jack’s characters, he isn’t very manly. He is a bit of a coward most of the time also.

However Riker did a great job manning up his character for this performance. I thought he was going to throw Allison across the floor at one point but he pulled it together for one of the most powerful Paso’s I’ve ever seen on Dancing With the Stars.

Bruno Tonioli said, “Captain Jack Sparrow you’ve got a lot of Blockbuster in your hands. That was mad and wonderful. You stuck everything you had into that. A super production for a super talent.”

Noah Galloway and Sharna performed the Foxtrot last week as Aladdin and Jasmine.Noah faced some difficulties with this dance because without his knee it was hard to do the proper rise and fall movement of the Foxtrot. Sharna reassured him that if he focused on his posture and frame the judges wouldn’t even pay attention to his knee.

After following Sharna’s advice Noah came out with a pretty great performance and impressed all of the judges.

Julianne Hough said, “ I think this is your first traditional ballroom dance, is that right? And of course we know that that is a challenge in itself. And so you know one thing I really loved is your frame was right on. Usually there’s an issue with the right shoulder poking forward but the thing that I love so much is that you have this clear and assertive direction. When you take a step or make a move, it’s confident and there is nothing vulnerable in that. You know your moves you know what you’re doing and that’s a really tough thing to do in general, and I think people can watch that, and learn from that.”

Robert Herjavec is by far one of my favorite stars on this show because his smile alone can light up a room. Bring his personality and charm you got quite the man. Speaking of “You got” let’s talk about “Who got” – I think Kym may have won the heart of Mr. Herjavec. Love is in the air…but that’s just my observation

Robert and Kym performed the Quickstep to one of the songs from Marry Poppins. It was a bit messy to begin with but a very exciting performance.

Carrie Ann Inaba was a little harsh when she said, “Chim, chimney, chim chimney, chim, chim, Cher-BOO. Come on. You were so out of step. But what I love about you is if we stayed on a close up of you it was like a ten because you were so happy like Bruno said but you’re footwork was off and your timing. The details do really matter I said it before. The steps matter. You started off with the wrong timing and it was a difficult song to stay in time with for you.”

Chris Soules continues to struggle week after week while trying to improve his dance skills. We saw a lot of tension between Chris and Whitney during rehearsals until Chris finally snapped. Whitney then brought in Alfonzo the winner of Season 19 of Dancing With the Stars who lifted all tension and reminded them to keep having fun.

Chris then ran into and calf injury right before the show. He fought trough it and came out with a

Nastia Liukin and Derek did a beautiful Jazz performance to “Love is an Open Door” from the movie Frozen. It was nice to see Nastia let loose a little during this number instead of her usual rigid gymnast nature.

Bringing out her playful personality with a solid performance pushed her up the leader board to tie with Riker and Allison for second place!

Willow Shields and Mark did an extremely eccentric theatrical performance as Alice and the Rabbit from Alice and Wonderland. There was so much going in it was hard to see her actual dancing.

Len said, “You’ve gone from Hunger Games to fun and games and I must say it was so much fun. Wonderful creative dance, it was absolutely fabulous. Sometimes I thought the concept got in a little bit in the way a little bit but the Foxtrot that you did was good, and you’re getting better and better.”

Patti Labelle has been having knee issues since week 2 and it has yet to stop her from putting on a phenomenal performance. She has such a beautiful heart that it reflects in her dancing. She was floating across the floor with such elegance. Patti and Artem did a beautiful Waltz. It was absolutely amazing and she made it through to this week!

I loved Suzanne Somers and Tony’s Jazz dance to “He’s a Tramp” from Lady and the Tramp. She was so calm and so confident in every move that she made. You barely noticed the slip up because the performance was so enjoyable. This was by far Suzanne’s best performance of the season. It was unfortunate she was voted off.

Don’t miss this weeks Spring Break episode of Dancing With the Stars! Time for team dances!