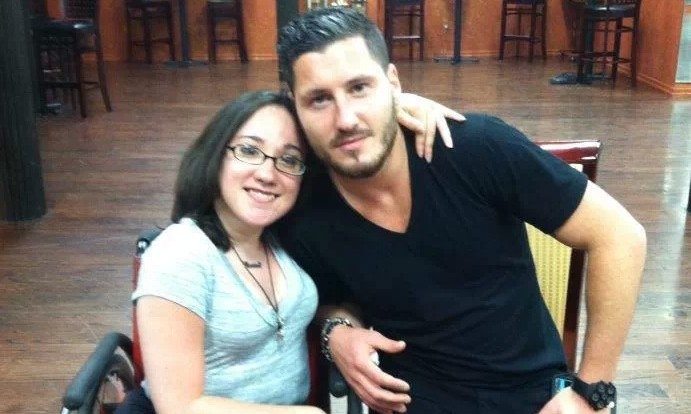 WHEELCHAIR DANCING PROVES THAT ANYONE CAN DANCE! EVEN IF YOU’RE SITTING DOWN.

We hear all types of excuses about why someone can’t learn to dance, or cannot continue to dance. After the experience we had with Marissa Meleske, who was wheelchair dancing, we will never accept another excuse for why someone can’t dance or learn to dance. Dancing is not only about physical expression through music. It’s about moving joyously and escaping to an alternate reality. It can be done with the entire body, or just one finger.

Marissa had replied to our Summer Bootcamp newsletter saying that her family was devastated by Hurricane Sandy and was not able to make it to our Summer Bootcamp for financial reasons. I then contacted Valentin Chmerkovskiy, and he immediately offered her a complimentary private lesson. The rest is history..

Several weeks after our lesson with Marissa, we enlisted some of our top instructors in a wheelchair dancing education training program. Several instructors at Dance With Me are now certified to teach dance to people in wheelchairs. Anyone can dance!

Read about Marissa’s experience at Dance With Me and Val in her own words:

To be honest, I started a blog about this on Friday but today was so above and beyond anything I could have ever imagined, that I scrapped it and I’m starting fresh. I wanted to try and capture the feelings and emotions I was going through up until today. So I’ll explain that briefly and then tell you all about today. I was asked to do this “short” blog, but the only thing short about me is my height (which I embrace!). But I’ll try my best not to drag this out too long! I’m sure not everyone is gonna wanna hear me go on and on…and on. But I can…I’m a writer, I could write an entire book on why Valentin Chmerkovskiy is the most amazing human being on the planet if I was asked to and I’d probably drop dead of old age before I finished. Not because of my talent for writing, but because he IS that incredible. Come to think of it, why doesn’t a book like that exist already? Maybe I WAS meant to write it (jotting that idea down now!)

So where do I start? Last week I heard about the 2 day dance camp that Dance With Me Studios has coming up over the weekend, with Val and Maks. Knowing I wouldn’t be able to afford it, and knowing the NJ event was the closest thing to it and I couldn’t get there, I decided to take a leap of faith. I emailed “Dance With Me” Studios back after they sent me the newsletter about the event. I asked if they’d have another closer event than NJ…and I continued on to ask if Val would be interested in teaching someone in a wheelchair how to ballroom dance. I’m all about trying new things, stepping outside your comfort zone and not letting anything stop you. I guess it’s fitting that I’m a life coach too. Not even an hour later I got a reply from Alex, the marketing director for the studios, that said “I spoke to Val and he can do it for you Tuesday at 4pm”. Um, say what?! I wasn’t even expecting a reply for days, let alone a reply that essentially said to be there in a few days to dance with Val. Val was out of town, I was so impressed that they could set this up so fast. After about an hour of trying to process this, I emailed back that that day worked for me (I would have been insane not to cancel things even if I had other plans!).

So today was the day. Surprisingly, I was not nervous at all. I was more nervous about getting there, being on time and all those types of things. I’d met Val briefly before so I knew, without a doubt that he would be amazing and even being in such close proximity to him wasn’t making me nervous. Being from NY, I have met my share of…shall we say…well known people (I hate the term celebrities) and I have to really respect you in order to support your craft. Just like I would any other person walking down the street. I already had the utmost love and respect for Val, but after this? I cannot think of ANYONE whose company I enjoyed more, well known or not, in my entire life. I’m not joking or exaggerating. He is just as beautiful on the inside as he is on the outside. We cha cha-ed for a bit and then he pulled up a chair, did arm dances and then we literally sat there talking each other’s ears off, all for about an hour and 15 minutes. He is SO warm and welcoming and the most chill, down to Earth person you will ever meet in your entire life. The man’s face was inches from mine the entire time, even when dancing, and I was NOT freaking out…that’s how at ease he puts you immediately! He genuinely is an incredible person and he’s so caring. He was asking me questions about my life, the hurricane and included my grandmother (who insisted on coming because she loves him too) and was just the most amazing person ever. What really touched me, and I’m not going to get into everything that was said during our time together because there are just some things that I would like to hold dear to my heart, but one of the things that really touched me was how encouraging he was about the fact that I’m a life coach and I want to motivate people. He told me that when he was approached about my request, he was asked “what do you want to do about this?” or something to that affect. He immediately said something along the lines of “What do you mean? Book her an appointment. I can do it Tuesday.” Not even a second thought. I really appreciated that because even though I’m proud to say I was his first student in a wheelchair, he went for it and didn’t let the wheelchair become an elephant in the room. He looked me right in the eyes the entire time and the only time the chair was even brought up was when he asked me about my life in one. We goofed around, had some deep serious moments and just had an amazing time.

My favorite thing about Val has got to be his sense of humor and how he says the most profound things and they just come pouring out of him. He seriously needs to write a book during the days he rests his feet from dancing. He doesn’t BS either. He is the epitome of “say what you mean and mean what you say”. You can tell he means everything, even the compliments. He told me that I inspire him, but in all honesty, I wanted to make this experience just as much about him as it was about me appealing to my clients and showing them you can do anything. I wanted HIS audience to see that even if they’re sitting down for much of the time, they also can dance. They don’t have to sit on the couch or in their wheelchair and wallow in self pity about how amazing Val is on “Dancing With The Stars”. They can do it too if they believe in themselves enough. And I like to think I got that message across by going to the man himself today. I’m not much of a fan of “Dancing With The Stars” overall, but that’s just me. I’m a HUGE fan of PEOPLE like Val who are merely trying to share the love of their craft and inspire others along the way. THAT is what he’s in it for. Not the glitz and glamour, though he’s thankful for the platform he now has. He’s a hard worker, incredibly talented at what he does, passionate beyond belief about life in general and he deserves every bit of praise for it and every bit of success that comes his way! Also, one more thing I will say is that I will now forever have the image of Val’s face in my mind when he tweets or Instagrams with a hashtag. He gets so into those hashtags and has so much fun with it!

I really could go on and on. All I can really say in a nutshell though is thank you so much to Val and the entire “Dance With Me” staff that were a part of making today happen for me. It was an unforgettable experience and I’m already going through Val withdrawals…send help! LOL. Don’t ever change Val. As Billy Joel says, “I love you just the way you are!”

5 Reasons to Compete as a Ballroom Dancer

Copyright 2023 Dance With Me All Rights Reserved