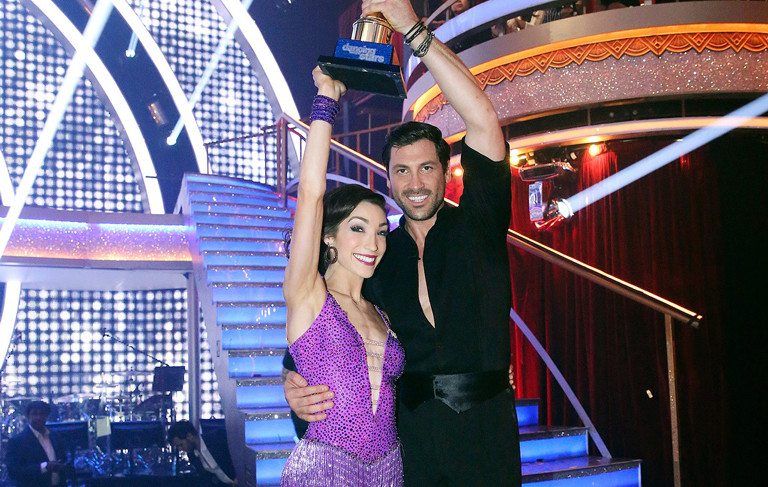 Words cannot describe how proud we are of Maks for the work he has done with Meryl, and how thankful we are for the amazing efforts Meryl put into the competition throughout the whole season!  What we witnessed is what you would call true teamwork!  Thank you Maks and Meryl for bringing the Mirror Ball Trophy home to Dance With Me!

For those of you who might not know Maks’ history, he was on Dancing with the Stars for THIRTEEN seasons.  Despite his amazing talent and efforts to win the Mirror Ball Trophy, Maks came home empty-handed every time.  Sometimes it takes pure inspiration to give someone the real determination to make it to the end of a competition such as this one.

It’s tough and Maks has done it over and over again; long hours of practice, seven days a week, the pressure of pleasing the judges and the voters, having to come up with new choreography and teach it to stars with no dance experience.  It’s not an easy job.  Like all the other coaches, Maks went through the motions of doing his job and he did it well, but it was never quite good enough.  He formed amazing friendships along the way and always had his partner’s best interest in mind.

However, what made Meryl different from all the rest, is when it seemed like there was nothing left to give and no other side to present…she showed Maks in a whole different light.  This time, Maks put his knowledge, ability, creativity, and heart into the season.  He was vulnerable, nervous, caring, and genuine.  The difference this time was that the challenge for him was not the competition, but Meryl herself.  Maks had to raise himself up to Meryl’s talent, because he knew she could go all the way.

Meryl and Maks performed a mix between the Foxtrot and Cha-Cha for the fusion dance that did nothing but solidify the belief that these two deserved to take the trophy home.

During 24-hour rehearsal, we see Meryl and Maks going about practice just like they have been all season.  No worries, just dance at this point.

Meryl said, “It’s hard to believe that all of this is coming to an end.  It’s been an absolutely amazing journey.”

Maks looked down at Meryl and said, “Are you ready?”

Meryl replied, “I think so.”

In her interview, Meryl states, “I’m so incredibly grateful that I got to go through this with Maks.  Um, he’s taught me so much, not only about dance but about, you know, growing as a person.”

Maks went on to express how proud he was of Meryl for everything she has accomplished this season.

As they prepared themselves for the dance to begin, it was sad to know that this would be the last time we would see them on the stage together.  The music began and they started off with a classic Foxtrot that fused into a sexy Cha-Cha.  What can I say?  Once again, they blew everyone away.

Carrie Ann Inaba, standing up with her arms in the air, was yelling as loud as she could to be heard over the crowd.  “Season Eighteen has… Season Eighteen has…” Laughing at how loud the audience was cheering, she stops and says, “They’re so good!  They deserve it.  Let ’em have it!”  When the crowd settles down, she goes on to say, “Okay, what I was saying is Season Eighteen has been phenomenal.  I mean, just, I think I, we’ve been doing it for so long and it’s mind boggling how great the season was.  But the best part of the season to me, honestly speaking, was you two.  Your artistry, your passion, the partnership, the focus, the determination.  You are marvelous.  Meryl, marvelous.”

Len Goodman said, “Season Eighteen, it’s been like a novel, full of twists and turns, and we’ve come here to the last page and we are sure not, still not sure how the story will end.  For one, it will be a happy ending.  And I’m not saying this is true, but this may be my last season and if it is, I couldn’t wish for a better dance to watch to finish up with.  You are great!

Bruno Toniolo ends with, “Oh, we’ll sort it out later, but I can state a fact.  The earth is moving for me and is moving for you.  I tell you, something is stirring inside me because watching you two is like, is like when you discover the passion and the excitement of your first love…dance.  Thank you.”

Meryl and Maks received another perfect score…30 out of 30!

Moving on to the elimination part of the evening, Candace and Mark came in third, which left Meryl and Maks, and Amy and Derek standing there side-by-side awaiting the results to see who would be the winner of Season Eighteen of Dancing with the Stars.

Amy, looking choked up with tears in her eyes, stood by Derek as the results came in.

My heart was pounding while waiting for Tom Bergeron to announce the winner.  Every muscle was tensed and when I heard him say…MERYL AND MAKS, I lost it just like everyone else did in that ballroom!

Supporting Dance With Me Family members Val Chmerkovskiy and Tony Dovolani rushed to the floor to congratulate them while jumping up and down so much that Tom had to fight to get Meryl and Maks over for their last interview!

Trying to gather his words, Maks said, “Awe man, it’s, it’s, it’s just plastic, but it means so much and when it’s lasting a decade of running after, it means that much more, and to do it with Meryl is a dream come true.  There is a reason it didn’t happen before – it’s because this was meant to happen with this one.”

Congratulations to Meryl and Maks for winning the Mirror Ball Trophy on Season Eighteen of Dancing with the Stars!

You both have inspired millions with your journey and have taught us all to value partnership, teamwork, and to appreciate the moments in life that are achieved through hard work.

Until the next season of Dancing with the Stars…see you later!

But wait! You can still visit our blog to keep up with the daily activities and updates with the Dance With Me Family!

Tell us what you thought about our Dancing with the Stars Recaps and more about what you would like to read on our blog!