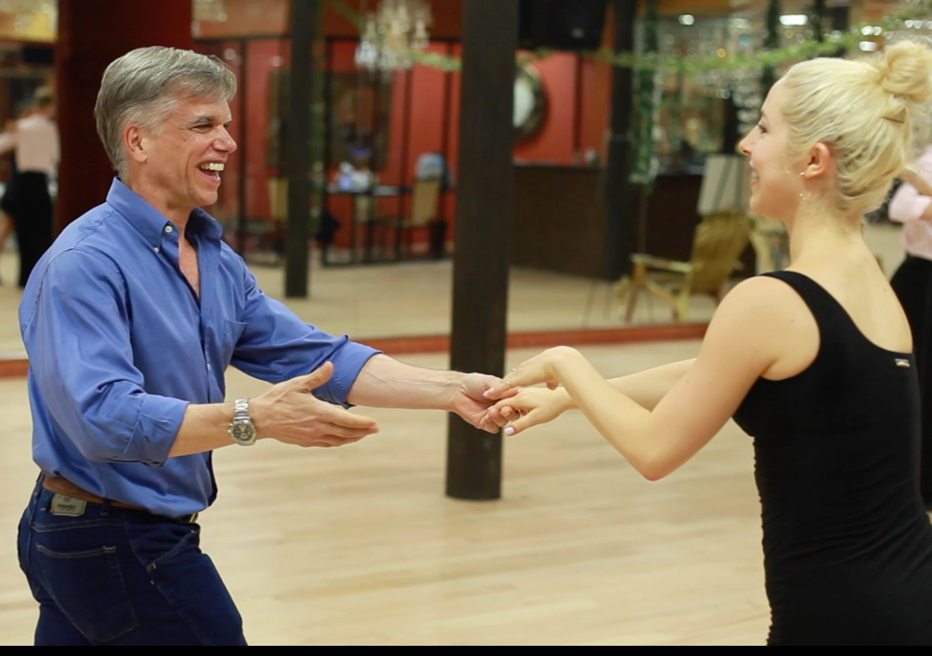 “STEP BY STEP, DANCING — AND DANCE WITH ME — IS HELPING ME FEEL COMFORTABLE IN MY OWN SKIN AGAIN.”

I remember bumping into Kenny at our 2014 Summer Invitational in Stamford, Connecticut. Usually he’s dressed in a button up shirt and nice pants whenever I see him inside our SoHo dance studio. This time, I see him wearing a short sleeve shirt, exposing his tattoos, some biker gear, and holding a helmet.

Now at this point I don’t know Kenny well enough to ask him about his weekend attire. Besides, I was on my way to practicing with his primary teacher, Leanne, for the pro-basic dance competition.

“I didn’t know Kenny rides bikes,” I told her. “He doesn’t seem the type.” He seems likes a nice, timid, professional man. I see him as someone who enjoys golfing or fishing or smoking cigars at his leisure.

“There’s a lot you don’t know, Alex. He’s like a super athlete and really jacked! He does all of these crazy marathon competitions. You should talk to him,” Leanne responded.

I took her advice.

So later that week, I had a chance to chat with Kenny about his extracurricular activities, why he started dancing, and what has changed since. After hearing that he had just finished a 375 mile bike ride (no, not motorcycle, BICYCLE) that spanned two days,  I immediately knew I had to feature him on our “#DWMFAM Stories” series.

Before his dance lesson, Kenny sat down and revealed what many men think, but are too afraid to say out loud. He spoke about overcoming a bad breakup and facing discomfort in a social setting, especially one as intimidating for men as ballroom dancing.

He also told me how… actually wait… I think it’s better if you hear it directly from him. Check out his email to me and the video interview below.

This is what he had to say:

“I’m 54, recently divorced, and I spent 2013 rebuilding my life. I started with getting back in shape: running, biking, triathlons, obstacle races, anything and everything. By the end of the year I was in tremendous shape, but something was missing. I needed something more than athleticism.

I signed up for dance lessons. I didn’t really know why, but I was very isolated and I had this gut feeling that I needed to get out of my comfort zone and learn something new about myself.
I told Tonja I wanted to learn to be more graceful, to develop some elegance, and so she taught me the waltz. Within weeks, I started paying attention to my posture, to the way I carried myself.
Recently, I took a yoga class, and the teacher asked if I was a dancer. I was surprised, to say at the least. But he said I moved gracefully, which I’ve NEVER been called before, and which I only got from DWM.
The other key aspect of dance, which came to me only after I started taking lessons, was the sensuality of dancing. I hadn’t experienced that in years, and I realized I didn’t even feel comfortable in my own skin. It didn’t matter that I was athletic and in great shape; sensuality comes from within, and in my humble opinion dancers simply exude sensuality.
How has Dance With Me helped? Six months ago, I had trouble walking through the door. Three months ago, I had trouble dancing one short dance among a dozen dancers in front of an audience. This month, I danced many times in a competition and began to enjoy it. And now I’m learning a solo [showcase] dance with my teacher and I’m excited about it.
Step by step, dancing — and Dance With Me — is helping me feel comfortable in my own skin again.”
-Kenny Herbert

Kenny is LITERALLY twice my age. Exactly twice… but probably three times as fit. In fact, he’s going upstate to bicycle 630 miles around Lake Ontario in a few weeks to qualify for a 750 mile race in France next year!

WHAT DID YOU THINK OF KENNY’S STORY? HAVE YOU CONSIDERED DANCING BUT ARE TOO SCARED TO TRY IT OUT?

SIGN UP AND RECEIVE A FREE INTRODUCTORY PRIVATE LESSON BELOW: