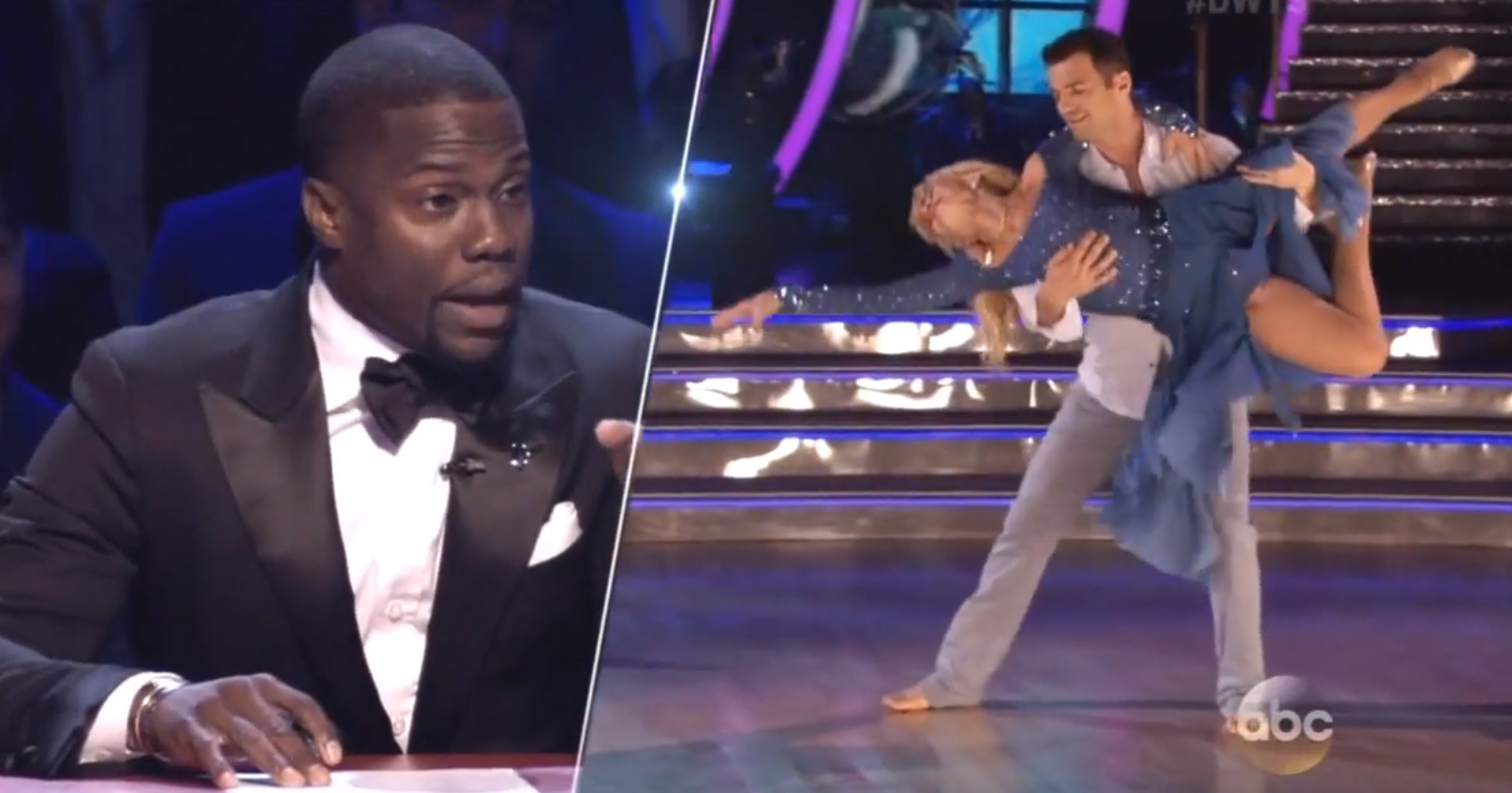 This week, Dancing with the Stars decided to infuse a little humor into the judging panel by bringing in well-known, hilarious comedian Kevin Hart.

For the “Movie Night” theme, each couple had to use a song from a famous film and create a routine to wow the judges.

During rehearsal Janel said, “When I heard we were doing West Side Story, I was just like – Aaaahh (screams).  We’ll have all these props.  We’ll have dancers.  It’s going to be a huge production.”

Two days into rehearsal, Val gets a text message from the DWTS Producer saying, “There’s an issue with the performance.  Call the office ASAP.”

Frustrated, Val paces around the room explaining how the producers are not approving any of the routine he created for the song due to legal issues.

Leaving Janel with a worried look on her face, Val walked out of the room to speak with the producer directly over the phone.

The producer explained that they are not allowed to do anything that resembles the original West Side Story.

Walking back into the room, Val says, “They are being very specific about not using any of the moves from the movie, which is very difficult when you pay homage to such a brilliant movie and such brilliant choreography.  So, the challenge now is to do the West Side Story, without making it look like the West Side Story.  Let’s do it.”

The music went on and, just as Janel intended, it felt like a full-scale production happening right before our eyes.  It was full of excitement and performed to perfection.

Julianne Hough, standing up out of her seat, shook her head and said, “Wait, what just happened?  I felt like I was just watching a full-on Broadway show.  You are incredible.  And honestly, I mean, that wasn’t just a good dance or performance, like you just opened up so many doors to your career.  That was hands down, I mean, in my opiniónes – That was perfecto.”

After that review, Kevin Hart began bowing down to Janel and Val for their performance.  Kevin said “That’s all Imma say, Imma bow down to that performance.  You were amazing, the both of you.  I loved the story that you told through the performance.  It was amazing.  I, I bow down.”

Following those impressive reviews, Janel and Val received TENS across the board, giving them a perfect score of 40!

An amazing performance from an amazing couple!

Following their remarkable performance last week, Betsey Johnson and Tony Dovolani were assigned Contemporary style to one of the songs from Ghost.

During rehearsals Betsey said, “Last week’s performance was the miracle I needed to make up for the week before.  This week, I’m doing a Contemporary dance…whatever that is.  I have to fly.  It’s like the skydiving I never wanted to do, but I’m doing it.  I’m very unpredictable and this dance you cannot be unpredictable.  It’s kind of like I fly or I fall.  The timing has to be perfect, the steps have to be perfect, and it’s risky business.  I don’t know if I can do it.”

Betsey and Tony glided across the floor so smoothly it was like she really was floating in the air.  Betsey is leaps and bounds ahead of where she was Week 1 and has made an incredible transformation.

After an absolutely beautiful performance, Carrie Ann said, “It’s confusing to watch you because, no, I know, I’m actually super confused because at times I look at some of the movements and you look like one of our dancers.  Like, you’ve got beautiful extension, you’ve got beautiful lyricism, you have courage beyond belief.  You did every lift beautifully, but you do have to point your toes just a little bit more, girlfriend.  Thank you so much.  She does Tony.  Don’t give me dirty looks.”

Kevin intervenes and said, “Uh, Betsey, first of all, uh, you tell that 21-year-old girl I just saw just now that I got the hots for her, because you bust it open.  There was a moment, there was a moment where Betsey hit the floor and hit a split, and we got a term called ‘drop it like it’s hot’ in the black community, and that’s what you just did.  Betsey, you just dropped it like it was hot.  I was taken away by that.  I literally saw a young girl dancing.  I am in awe.  Good job out there.”

Julianne said, “I have to agree.  I do think you dropped it like it’s hot.  Um, but I’ve said it once and I’ll say it again, girl you are flexible.  And yes, Carrie Ann is right…point those toes.  But I love this journey that you’re on.”

Lastly, Bruno says, “No one can bend it like Betsey.  That girl is bendy.  It’s like that character in The Incredibles, the one, she’s like, that, that woman (makes an exaggerated stretching motion).  She can be stretched in any direction.  She never breaks.  Wonderful, darling.  She is right, point your feet and a little bit more continuous motion.”

Let’s not forget about the elimination for this week.  It all boiled down to retired Mixed Martial Arts fighter Randy Couture with partner Karina Smirnoff, and actor Jonathan Bennett with partner Allison Holker.  In the end, America sent home Randy Couture.