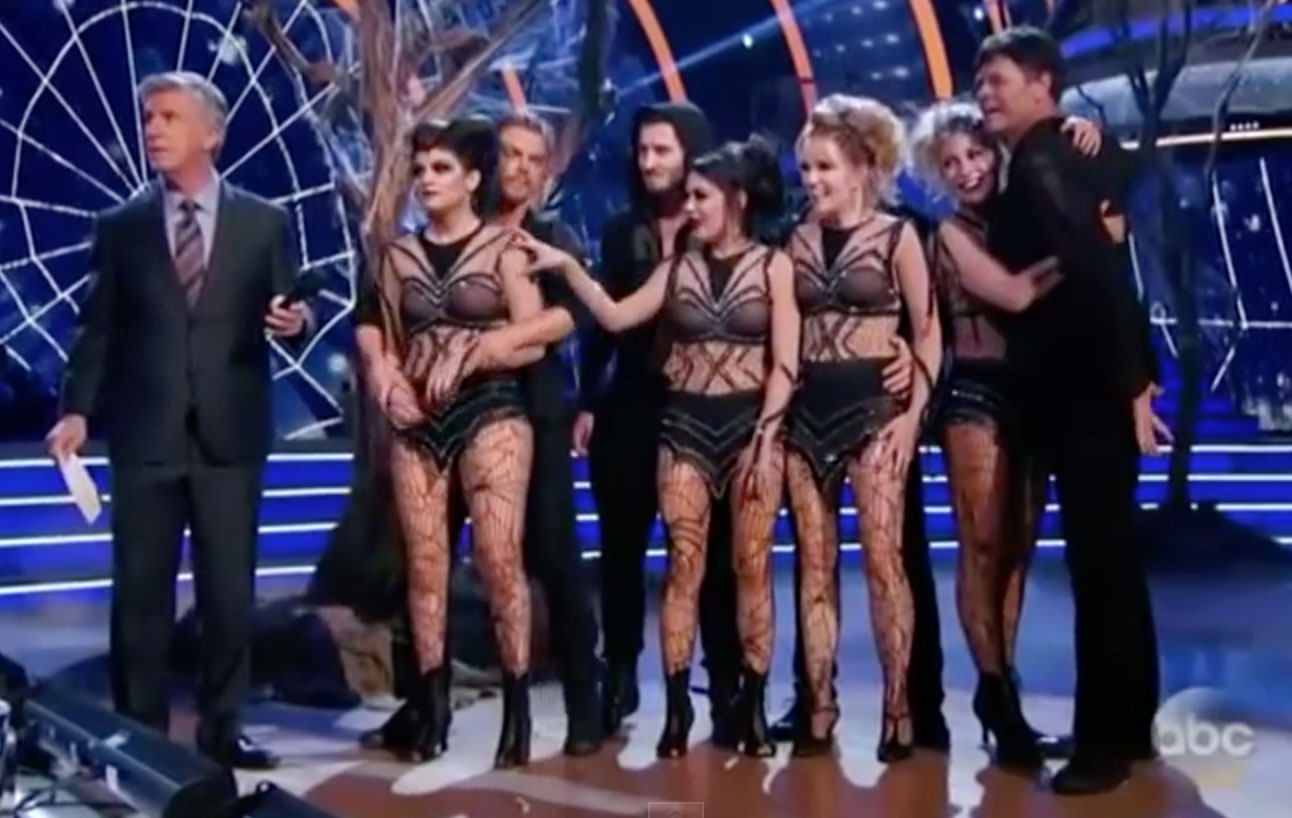 Trick or treat!  Hope you had a Happy Halloween! Let’s keep on celebrating with a recap of last weeks Halloween Special on Dancing with the Stars!

Janell Parish was very excited this week because she chose to do the theme song to Pretty Little Liars that is about secrets and murder! Poor Val was killed off in the number and Janell seemed to be quite excited about it!  They performed a very theatrical Viennese Waltz that was beautiful, however, some of the judges found it to be a little too centered around the “Halloween theme”.

Julianne Hough was first to comment, “My, my, don’t you play that character well.  You look gorgeous. You look stunning.  I think the only thing that I was truly missing was a, um, a proper Viennese Waltz.  I think that was beautiful and it told the story, but I felt like the Halloween theme kind of got away with you a little bit.  But, uh, I mean it was beautiful.  You guys look great.  I think one thing too, to work on – and I want to be picky with you because you are so great – when you go and you do your arm like this (holds arm vertically in the air) you stop it here, you don’t continue the motion.  You go – and then you’re done.  You know, so work on that for now.”

Bruno Tonioli followed with “Look at you, dressed to kill.  The slinky, slippery, seductive, murdering man-trap.  The thing is, what you did is you got caught in the role and it was beautiful, but you have to continue a line into space all the time.  When he gives you all these complicated arm moves, you cannot interrupt it.  You know, it has to flow.  I’m sorry, another accident is about to happen.  But apart from that, I thought it was a really, really good number.”

Carrie Ann Inaba said, “You know, I’m going to actually disagree with both of you, because the one thing I thought you did so well was the fluidity of motion.  Like, you never stopped moving.  It was so, like, oozing from one move to the next move.  And I thought the character and the proper technique came together beautifully, Val, so I thought you did a great job.  I don’t think we’ve been seeing so much of that tonight. One thing I want you to work on is when you develope, you have to point your toe just a little harder, I know it’s in the shoes, and you have to work on your spot a little tighter.”

Skipping over Len’s comment because of the lack of time, Janell and Val headed upstairs to greet Erin.

Erin said, “I come bearing gifts.  Did you leave this downstairs, this little doll?”

Janell answered “WOAH!  I just realized, okay so, I kissed it with my lipstick, but it kind of looks like blood where I killed you.”

Erin responded, “The head is still on though.  Was that the intent, or …”

Janell pointed and said, “Look, you see it?  My doll.”

Erin said, “And you know what I see?  I see a much happier Val, because it was a very serious dress rehearsal.  Everybody seems to be serious tonight.  What uh, what’s going on?”

Val answered, “You know, we’re all passionate and I want to thank the judges.  Honestly, like, I was thinking of talking to them this week because I feel like it’s really important.  I look for them for confirmation and for guidance on how to be better for her because that’s what we prioritize.  We want her to be a better dancer.  You know, so, I love that today’s comments were about her dancing and I appreciate that because it gives me a bit of clarity and anyway, I’m talking.”

Val said, “Now that I think about it, it’s good that Len didn’t say anything.”

He spoke a little too soon if you ask me.

Tom Bergeron stopped and said, “Hey, you know, we’ve waited 4 or 5 weeks for you to come back.  So the hell with this not letting you talk.  What do you wanna say?”

Len Goodman looked down and said, “Well, for me it was a lovely fluid dance, but there was no Viennese Waltz.  There was not one step…well, it’s the truth!  It’s the truth, ya plunker!  It never got in hold once around the dance floor.  It was a beautiful dance in three-four time, but not a Viennese Waltz.”

I think we all knew that was coming.

I thoroughly enjoyed both Team Bitsy and Team Creepy and was so impressed with the unique characters in both performances. From the creepy crawling black widows to the freaky circus act, it could have been anyone’s win.  However, Derek lead his team to victory yet again, and Team Bitsy received a total score of 36 – Team Creepy received 32.  I don’t know if you knew this, but Derek has not lost a team dance since he has joined Dancing with the Stars!

Now to the elimination round…Muahahaha!

Thrown into the elimination this week were Tommy Chong and Peta Murgatroyd, as well as Antonio Sabato and Cheryl Burke.  When the results were in, America voted off Antonio and Cheryl, giving Tommy and Peta another shot at the win.

Antonio said, “I met the world, I met the greatest here. You know I was able to dance with the greatest dancers in the world.  She’s a friend of mine, part of my family right now, and it’s all about the fans and that’s why I’m here and the man upstairs.”

Cheryl follows with, “I’m just so proud of Antionio and this has been the most memorable season for me for so many reasons and it’s just so sad for me to say goodbye, but I just had the most amazing time with you and I’m so proud of you.”

Happy Halloween everyone! Have fun, get your sugar rush on, party hard, and most importantly be safe!

See you back here next week for the next recap!

Copyright 2021 Dance With Me All Rights Reserved