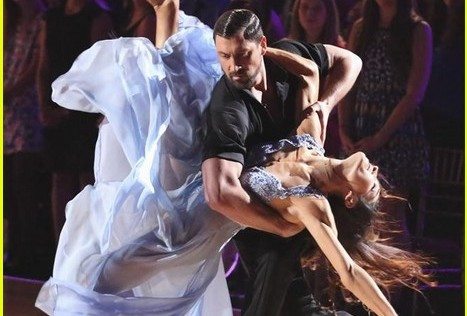 DANCING WITH THE STARS SEASON 18 WEEK 3: THE STARS TELL THEIR STORY

Another amazing episode of Dancing with the Stars nearly left us all in tears this week after hearing the heartfelt stories of the stars, and seeing the beautiful dances they created to express each story.

Special guest Robin Roberts from Good Morning America joins the judge’s panel and explains how, on a typical Monday night, she would be sitting at home with a big bowl of popcorn, with her froggy slippers on, preparing to tweet her thoughts on the show.

She then goes on to say, “To experience this electric atmosphere firsthand is remarkable. This audience and I want to say to each and every one of you, thank you for bringing such joy into our homes and lives”.

Tony and NeNe were first on the floor last night dancing the Rumba dedicated to her husband Greg Leakes.

NeNe said, “I chose ‘I Believe in You and Me’ by Whitney Houston because I walked down the aisle to this song, so it really means a lot.” She then went on to explain the story of her marriage with Greg.

When they first got married, there was a continuous attraction, but as the relationship continued, it started to fizzle. “We were not seeing eye to eye. We were arguing all the time.  It didn’t work for me”.

NeNe filed for divorce and for a long time, neither of them spoke.  “I never stopped loving Greg, so when we broke up the connection was still there”.

During practice, Tony prepared a Rumba routine that would act as a tribute to NeNe and Greg’s second marriage in 2010, and give NeNe the chance to express how much she appreciates her husband.

Tony said, “Think about it… let’s recreate that moment for a second.  The moment you guys got divorced… But you’re coming back now, you guys are rediscovering your love.”

As they positioned themselves on the floor, we saw NeNe at a distance as Tony sat on the bed waiting for the music to begin…SHIRTLESS I might add!

The two of them seemed to be gliding across the ballroom while performing their very sensual yet powerful Rumba.

Carrie Ann Inaba said “Truly what you did… I think maybe it was the passion that’s so alive between you two that brought out such a beautiful sensuality in your movement. It’s really like you were as large as your heart and your passion was in that dance. Your arms were gorgeous! Beautiful job!”

NeNe and Tony received a combined score of 31 as they walked off the stage with excitement.

Next from the Dance With Me Family to step out onto the stage were Val and Danica!

When Val saw that Danica chose the song “Lullaby”, for her dance, he seemed a little confused until she started explaining her story.

Danica went on to say, “My most memorable year was 2010, because that was the year my son Draco was born, and just a few weeks prior my grandma passed away.”

She then explained how the song “Lullaby” answers the question that any child would ask their parents…if one day they would have to leave them.

Danica’s grandmother never got to meet her son, but she always felt she had been with her every day.  She wants her son to feel the same way and said, “I want him to know I will always be there for him, even when I’m gone.”

As the music began, Val approached Danica from behind, gently putting his hands on her shoulders as they began a beautiful contemporary dance, floating as if it was something out of a child’s fairytale.

When the music ended, Danica ran into the audience and picked up her son, hugging and holding him tight all the way to the judge’s table.

Len Goodman said, “The movement was so, so fluid.  It was like butter on a hot muffin. It just was smooth and it just glided across the floor.  That was beautiful.  Well done.”

Bruno Toniolo went on to say, “It was an enchanting motion driven by emotion. It was spellbinding! My jaw was dropping. Everything you did had such an intent, such truth, and everything was clear for all of us to see. Wonderful!

Val and Danica received 9’s across the board, giving them a combined score of 36!

Extremely proud, Val mentioned how four 9’s will put a lot of pressure on the next Pro. In fact, he said, “They CAN’T get four 9’s”.  We loved the confidence, Val!

Lastly, we got to see Maks and Meryl with their very foxy Foxtrot!

When Maks was explaining that this week their dance would be centered on her most memorable year, Meryl said, “For me, it’s not just a memorable year.  It’s more like a 17-year journey.”

Meryl started skating with her partner, Charlie, when they were at the young ages of eight and nine years old, respectively. She was a very shy child, and it was difficult for her to look into Charlie’s eyes. So much so, her coach actually threatened to put a sticker on Charlie’s head to get her to focus.

As you all know, Meryl and Charlie won the gold medal in this year’s Olympics. When she explained what it felt like to stand up on the podium, she said, “Standing on the podium is a particularly patriotic feeling. You not only feel like it’s been your own effort and your own triumph, but it’s been so collective. It’s been our entire support team.”

Meryl chose the song “All of Me” by John Legend because it reminds her of the year leading up to the Olympics, when she gave all of herself to earn that gold medal.

Meryl and Maks danced together in perfect harmony from start to finish.  They elegantly moved around the room wowing judges with the amazing grace and technique of their routine.

Robin Roberts said, “I love the fact, Meryl, that you couldn’t just choose one year, that it was many years because life is a journey and sometimes it doesn’t boil down to that one year.”

Robin remarked how hard it is to envision Meryl as a shy young woman after seeing her perform so confidently across the floor.  I think we can all agree there – especially after that intense nose-to-nose moment Maks and Meryl shared during their routine.

Bruno Tonioli said, “Irresistibly romantic! Apart from the fact it was like watching a love story developing in front of your eyes, technically what you put into this dance on week three of Dancing with the Stars is incredible”.

After the phenomenal reviews from the judges, Maks and Meryl were the first couple this season to receive a 10 on the scoreboard. More like three 10’s!

Sorry, Val! I guess big brother had to prove to you that there is one pro that can get higher than a 9!

Feeling exhilarated with their combined score of 39, Maks picked Meryl up and twirled her around!

Dancing with the Stars is heating up, and the big SWITCH is coming in week FIVE! Don’t forget to vote for who you would like to see dance together!

Let’s not forget that we sadly had to say goodbye to the sweet Billy D due to the chronic back problem he’s been having.

His last words were “I’ve had a wonderful, brilliant, fantastic, blast of a time, and working with this wonderful beautiful young woman has been pure, pure joy, and I want to thank every one of you folks who have been supporting us.”

What did you guys think of the second episode of Dancing with the Stars? Do you have any predictions for who will be partnered up for the switch? Share your thoughts in the comment section below!