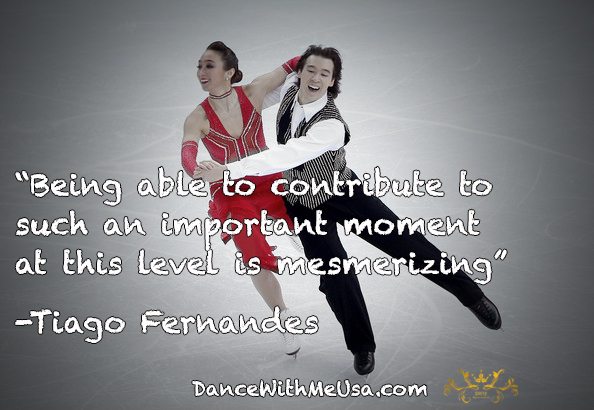 OLYMPIC FIGURE SKATING COME TO DANCE WITH ME FORT LEE

Dance With Me’s very own Joao “Tiago” Fernandes had the pleasure of training and choreographing multiple Olympic Figure Skating teams. Tiago is currently a dance director and manager at Dance With Me Fort Lee. He was honored to have helped Olympic Ice Dancers represent their country. See what he had to say about his experience as a choreographer for the Olympians.

Joao “Tiago” Fernandes:
“Growing up watching ice skating, and ballroom dance competitions in Europe, it never crossed my mind that I would somehow end up being involved as a choreographer for the stars. Choreography has always been my passion. I love to create a story with movement and dance. After moving to the US, joining Dance With Me has given me many opportunities, such as this one, which allowed me to continue to challenge myself and grow in different directions, feeding my soul and devotion to music and dancing.

Throughout 2013, I had the chance to work with three different Figure Skating Teams, coached by Galit Chait Moracci, the siblings Chris & Cathy Reed, Dmitri Dun & Siobhan-Canedy, and Allison Reed & Vasili Rogov.
We worked on their understanding of the basic fundamentals of ballroom dance, general technique, partnering, connection, patterns, and different amalgamations to improve their representation of the various styles on the ice.

In addition, we choreographed a lot of different sections in the moments where they are allowed to be more theatrical and expressive.
Our style of dance, similarly to ballet, is more refined and graceful in terms of the movement and interaction between partners, which makes the performance seem so magical and clean.
Chris and Cathi Reed Compete at Sochi Olympics in Figure Skating

All of them are very talented, disciplined, and humble athletes. They push their limits every day to reach their maximum abilities and level of skill, with the intention of producing the best performance possible. The Ukrainian and Japanese teams were both present in Sochi Olympics, with the siblings, Chris & Cathy Reed (JPN), achieving the best result.

The challenges of choreography bring a smile to my face. Being able to express my thoughts and ideas into movement is always fun and exciting. Being able to contribute to such an important moment in these athletes’ careers on this level and dimension is mesmerizing.”

Joao “Tiago” Fernandes also choreographed La Chat Noir for Dance With Me Glen Head of Long Island, which was performed in September 2013.