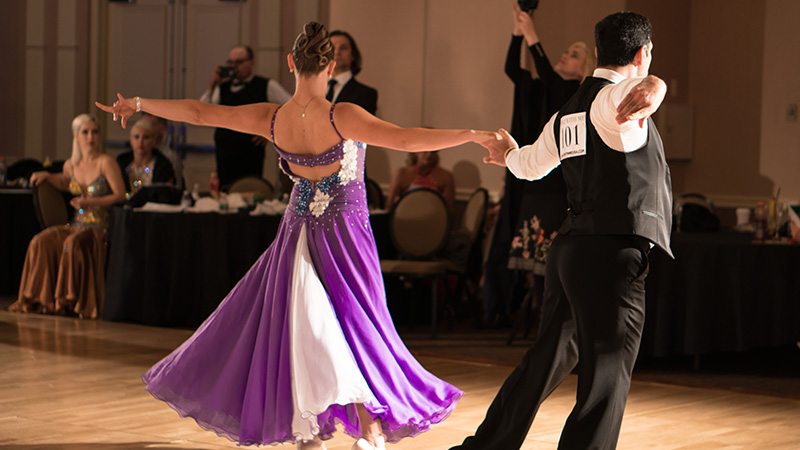 The tango is known as the dance of passion, mystery, and seduction. However, it can also be hauntingly beautiful, deeply introspective, or at times, quite flirtatious and whimsical. Tango dancers are often seen in a closed embrace gliding skillfully across the floor, weaving their legs around (and sometimes in between) one another. Tango is also famous for it’s dramatic “picture lines”, which explains why it is one of the most photographed dances in the world.

The specific patterns and techniques of the tango vary depending on the style. The traditional or “Argentine” tango is the most recognizable with its passionate hold and provocative leg flourishes. The standard ballroom version of tango takes the intensity of the dance in a rather different direction. In this style, dancers use a more conventional ballroom frame and move quickly around the room with sharp, striking. Finally, the American style is a fusion of both techniques – more conventional than the Argentine and more legato than the standard. This style also incorporates more “open” patterns where dancers separate, an allusion to the choreography seen in the great American musical.

Where does it come from?

Tango’s history is as intriguing as the dance itself. While there are many accounts as to the legend of how the tango began, there are several details that are commonly accepted as part of its origin.

The most famous legend surrounding the tango revolves around the world’s “oldest profession”. While it is true that tango would have grown in popularity in the brothels of Buenos Aires, the chances are more likely the dances were formed in the poorer rural villages and neighborhoods in and around Buenos Aires. The brothels simply provided a rare meeting ground for all classes in society, and the tango was most likely a popular way for waiting customers to pass the time.

By the turn of the twentieth century, Argentina had experienced substantial economic growth due to the exportation of its vast resources. Young well-to-do Argentinian men would often spend a season visiting Europe as part of their education and brought the dance of their country with them. Despite its provocative nature – or more likely because of it – the dance quickly became a huge hit in Paris and by 1913, much of the world was clamoring to learn this “new” dance.

Throughout the years since, the dance has experienced surges of popularity. Its dramatic nature lends itself to both film and theater, and some of the most memorable movie scenes in history have involved a couple passionately dancing the tango.

By the mid to late twentieth century, the tango found it’s way firmly into the competitive ballroom world, and the dance took on a whole new flavor. Regardless of context, there is no doubt that tango will continue to be a favorite of students for many years to come.

For a more in depth look at the history of tango, we recommend: www.history-of-tango.com

Why should I learn it?

Tango’s unique hold and cat like style of movement not only make it a show stopper on the floor, but a great method for learning musicality, sharp footwork,  and powerful leg actions. It is an excellent dance for those looking to stay more grounded in their movements, as it is danced in a more flexed position with little to no rise and fall. Tango is also an excellent dance for improving one’s speed and reflexes.

However, most people who take up tango do so for the emotional and mental release it provides. There is arguably no better dance to get “lost in”. Tango encourages its dancer to put the outside world aside of focus on the here and now. Perhaps more than any other, it is a dance that you “feel”, and when done well, the feeling is exhilarating. It is no wonder it is so beloved.

How do I learn it?

That’s why we’re here! Visit www.dancewithmeusa.com today to find out more about how you can learn to dance this and many other amazing dances. See you on the floor!